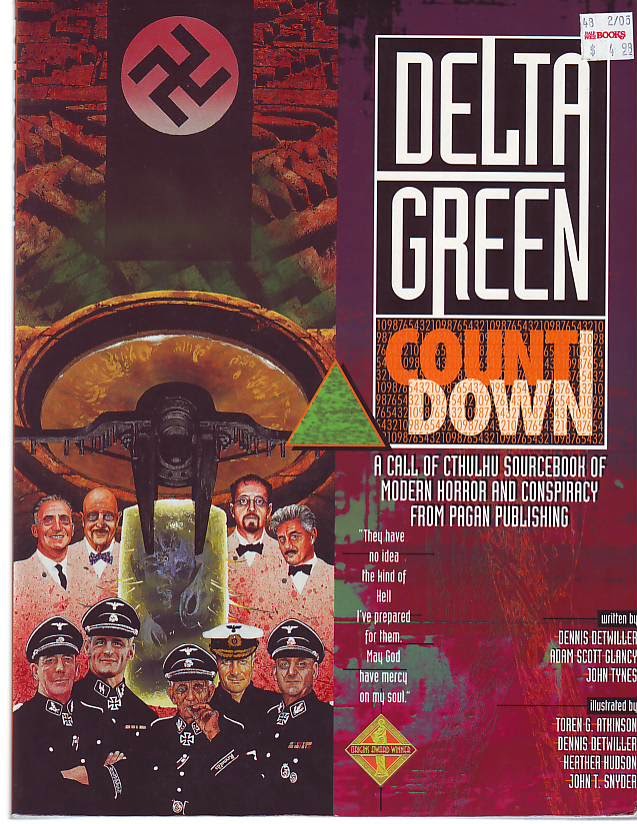 No Future - Get used to the taste of ashes.

The Countdown to the apocalypse has begun. As our darkened globe spins through the eternal night, the lasting legacy of the human race is nothing but a scream--drowned out by the roar of destiny devouring us all. This is your last chance to show the cosmos what it means to be human: the will to fight.

Delta Green: Countdown blows the doors off the world of Delta Green, reaching wider and digging deeper to map the terrain of the twisted pulp apocalypse we call the dawning of the 21st century. Brace yourself for the final world order: The Insects of Shaggai, alien parasites subverting the leadership of a nation; PISCES, the U.K.'s attempt to harness the unknown; The Army of the Third Eye, terrorists fighting a bloody battle against alien invaders; GRU SV-8, a band of desperate operatives fighting darkness in the ruins of Russia; The Skoptsi, occult fanatics with an eight-hundred-year legacy; The OUTLOOK Group, where Majestic-12 tests its elite; Phenomen-X, a syndicated TV news show that pokes its camera in all the wrong places; Tiger Transit, a former CIA airline now in the clutches of a Tcho-Tcho drug cartel; The D Stacks at the American Museum of Natural History, where Dr. Jensen Wu classifies the unclassifiable; The Keepers of the Faith, traditionalist ghouls fighting the lean and hungry Heretic ghouls beneath the streets of Manhattan; and The Hastur Mythos, a twisted skein of surreal destruction weaving its way through humanity.

Plus: New skills; new spells; new Mythos tomes; rules for psychics; a microbiologist's dossiers on paranormal lifeforms; profiles of international intelligence and law-enforcement agencies; dozens of useful NPCs; two scenarios; a short campaign; and more.
Posted by Wymarc at 1:20 AM