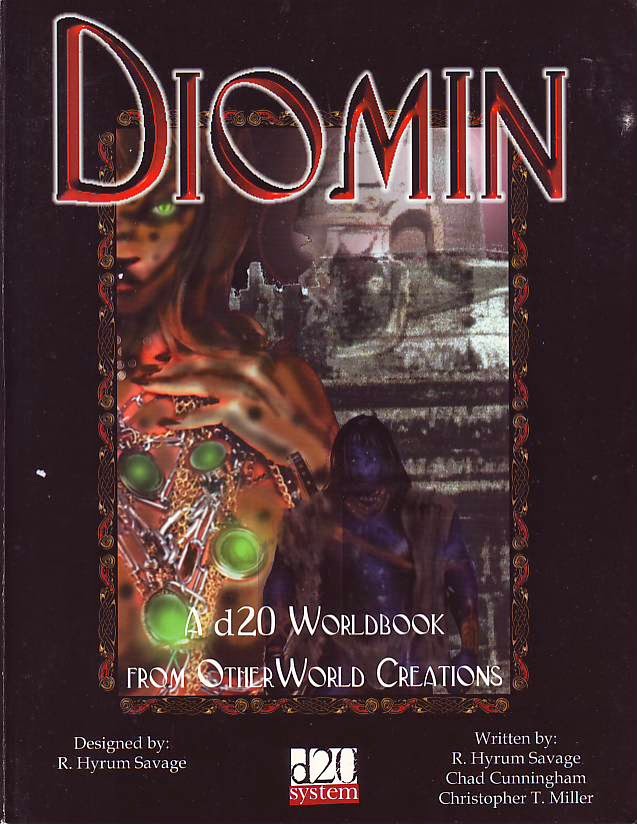 Diomin is a world governed not by science but by myth. It's a world where sorcery functions and the Gods play an active part in everyday life. Diomin lies at the juncture between the Spirit World and the Divine Realm, created by the One God to act as a bridge between the two. The result of this is sorcery and mortal life. To this very day Diomin is being fought over by the Gods.

The Gods themselves live in the Divine Realm and interact with mortality through their representatives, as well as their magics. Those in the Spirit World also have dealings with mortals, including powers and magics of their own.

There is much to discover and much to accomplish as nations fight with nations and Gods scheme for control of mortality. Whole cultures are in the process of change, not knowing what the future holds.

This book contains the information you need to start playing on Diomin. It introduces several new races:

- The Arak, a nomadic people;
- The Gnolaum, a beautiful forest race; and
- The Hearthom, a race made of stone.

From the standard races, only humans exist on Diomin, under the names The Tirasim and their evil brothers The Zeredites.

The book also introduces a new class, the Shaman, a class that can commincate with and control spirits. The book also makes some minor changes to other classes, most notably to Paladins, to allow all alignments.

Furthermore, the book includes an introductionary adventure called To Save A Nation.
Posted by Wymarc at 12:37 AM