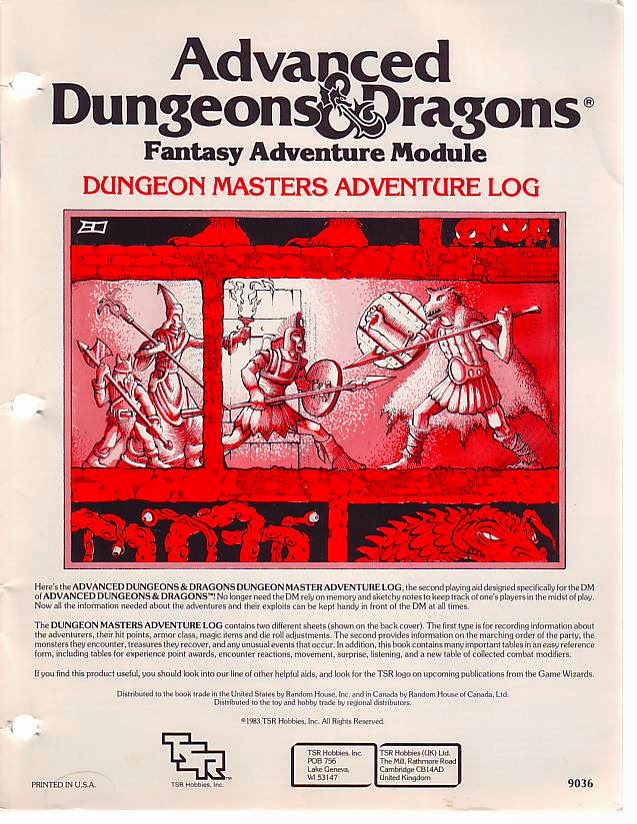 The Dungeons Masters Adventure Log, billed as a "Fantasy Adventure Module" on the front cover, is a DM's tool for tracking a party of adventurers and their encounters in an easy to read format.

The product is centered around two sheets, and the booklet is printed so they are opposing pages. The first captures the essential information for each member of a party of adventurers (name, alignment, hit points, etc). The second tracks collective information on the group (marching order and light sources carried), and key elements of their encounters (basic information on the monsters, treasure, and unusual events).

The inside front cover, the first three pages, and the last page reprint an eclectic assortment of game rules from the Dungeon Masters Guide that weren't included in the Dungeon Masters Screen (for instance, combat modifiers, magical aging sources, and how much it costs to hire an NPC to cast a spell). The four inner pages have utilitarian sketches of various types of armor, helmets, barding, and weapons with a focus on those that are less commonly known (such as polearms).

The inside back cover has two sample log pages, including several characters from Basic Dungeons & Dragons (e.g. Morgan Ironwolf, Black Dougal), several players who made contributions to the industry (including Dave Cook, Steve Marsh, and Tom Moldvay), and jokes (Elron Hubbard, the chaotic neutral magic-user thief).
Posted by Wymarc at 4:07 AM