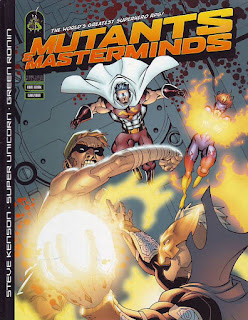 A fair review can be found on rpg.net here:

''Mutants & Masterminds was published in 2002; the setting, which was once known as Century City, became Freedom City was published in 2003. The first edition of so-called M&M books featured graphic design and art direction by the design studio Super Unicorn, but other firms provide the artwork on all subsequent releases."
Posted by Wymarc at 7:33 AM