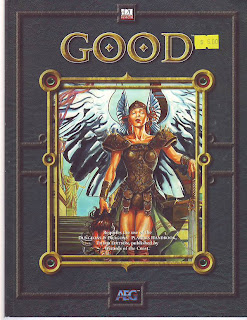 As I have said before I have found all of the AEG books along the  lines of Good to be useful in some way. This book has come the  closest to making me regret having said that. The first 50 or so  pages are geared toward nothing more than new kits and prestige  classes. I won't spend much time going over those. Actually that is about all the time they will get.

The third section goes over the topic of Magic. This section is  much better than the previous two but that bar had been set  pretty low. It goes over the summoning of good creatures which is  actually not a topic I recall reading about in any other material  before. The spells and magic items are items that can be borrowed  from and there was nothing so bad in here to make the section  unappealing.

In section four the topic is Heroic Legions. The book refers to  them as scaled down prestige classes and at first glance they  most likely are. I however have always thought clerics had it too  easy in D&D. If they are minions of a deity why are they not  expected to follow the tenants of that deity and even try and  convert the people they adventure with. A cleric should never be traveling around in a group that were not all of the same belief  or close to them.

This section lays out the idea of faith points which are awarded  based on Deeds or taken away for Transgressions. The section lays  out good examples of Deeds and Transgressions for different types  of deities. The Faith Points can then be used to gain what the  book calls Boons. These are abilities awarded by the deity to the  faithful. Once spent the character has to start accumulating them  again. There are also Banes which are to be applied to those who  waiver in their faith. The Banes might not be as well thought out  or useful as the Boons but they could be adapted. Section four  also lays out the idea of Groups and Orders which I think would  greatly add to the role playing potential of clerics and other  religious based classes in the game.

The final section gives the DM a fairly broad selection of new  monsters. New monsters are never a bad thing provided they are  not overly silly or too powerful. Some of the creatures in this  section come close to crossing the line in both directions. In  the end though taken in context they end up be acceptable for the  topic of the book. I am not sure that most of them would ever  find widespread use in any campaign I was running but then again  one never knows.

Bypassing the first two chapters the book ends up redeeming  itself. The prestige classes and kits are most likely something  that DMs will use. The kits provide ideas for characters but I am  seeing the beauty in the post on another blog (forget which  sorry) about this is suck and this is you. The characters start  as adventurers and become heroes. I say let them develop over  time. If they want a back story let them have it but let them  pick their profession as they learn just like a college kid  declaring a major. In the end the book is worth it but I would  pick up others in the line first. It does have a great cover  though!

Fantasy games have long allowed players to take the roles of  mighty heroes battling demons, dragons, giants, and other  villains. This sourcebook expands the options for good  characters, presenting new magic items, heroic orders, new  paladin classes to give every facet of good its champions, and  rules that allow the gods to have a tangible effect on a  character's actions and choices.

There's never been a better time to be a hero.

It's Time to Save the Day!

When this spell is cast the magic user causes the target creature  to become endowed with the ability to startle creatures viewing  them. This spell will have varying effects based on the level of  the victims and their saving throw.

The initial effect of the spell will cause all seeing the target  to spend the remainder of the round the spell is cast or their  portion of the following round, if they have already acted the  round this spell was cast, startled not being able to take any  action. Those affected will need to roll a saving throw after the  first round.

Those of a lower level than the target of the spell who fail will  turn and flee in terror for the reminder of the spells duration.  Those who make their save will spend one more round startled and  unable to do more than defend themselves. After that round they  will suffer a -2 to hit and to all saves for the duration of the  spell their confidence shaken.

Those of the same level or higher than the target of the spell  who fail their save will suffer the same effect as those who made  their save but were lower level. Those who make the save will  actually be embarrassed that they were affected in such a way and  will become emboldened. They will get a +1 to hit as well on  saves and with damage.

Disclaimer: The spells that you will see, for how ever long the  write ups last, were all written up or conceived of back in the  80's so the terminology may not appropriate for anything other  than 1e and depending on how well I did back then it may be  slightly off for that as well. If there is any duplication of  spells that exist now it is most likely I wrote mine first :)  Please feel free to comment on them but try not to be too hard on  me. If anyone wishes to use these in anything they print please  let me know in advance and all I ask is proper credit.
Posted by Wymarc at 5:53 AM