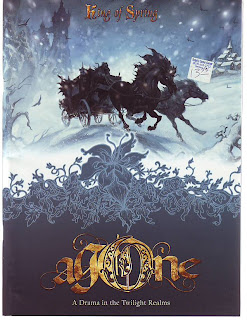 Some time ago I wrote about Agone which is a game I am fascinated with but have  never had a chance to give a full run through for any period of time. The King  of Spring is the first adventure released for it (at least here in the United  States). The system refers to them as dramas and given the higher level of role  playing involved I think it deserves that label.

Though it is treated as an adventure the drama in my opinion would be better  served as a drawn out story arc with other events placed between the three acts  that make up the drama. This is not required but I think it would make the  adventure play better. Using it as written though possible makes it seems a  little rushed and perhaps contrived.

It is a drama that grows as it progresses starting out as a simple mystery to solve and growing into something much larger and more sinister eventually  threatening the realms of the adventurers. The drama starts with the characters  being asked to help the Baron of a neighboring realm stave off a curse that has  plagued his family for over seven hundred years. I wont go into it much further  than that except to say it becomes much more than that.

The cover of Agone is one of the first reason I ever picked up the game to see  what it was all about. The cover to the King of Spring picks up right where the  cover of the core rulebook left off. I wish more modules and games went with  this type and level of art in their products. The interior art and layout though  spartan is well done and has an overall appeal using if not the same page  framing as the rulebook one that is very close.

The adventure is again one that is more roleplaying than combat though it is not  without that. In the end it might take a special group to appreciate Agone in general and King of Spring specifically. If the group is looking for a dungeon  crawl this won't be for them. If the players want a game steeped in drama and  political intrigue with a number of mysteries to solve...and oh yeah combat in a  level that might be realistic then this is for them. The game and the module can  be picked up very reasonably so I think it is worth giving it a try.

With the coming of winter, all doors and shutters in Gloomwind are locked tight.  The inhabitants live along with their fear, as their baron suffers from his  curse. The pall of death has fallen upon the Barony of Melif once again...

With the coming of winter, seasonlings of Spring and Summer are weakened by the  bitter cold of the Draaken Mountains. Yet, war is imminent. The Decans have awoken ancient enmities.

With the coming of winter, the eminences grise ensconce themselves in safe  hiding places and exchange dark secrets. They plot the destiny of Harmundia and  its rulers. Perhaps, they may discover a Sentence from the immortal Janus to  restore peace to the land.

The King of Spring is a ready-to-play Drama for a Troupe of four to six  Inspired.

As the Troupe goes to the assistance of the Baron of Melif, the Inspired have  many strange encounters and attract the attention of unexpected enemies to their  Domain. War is at the gates. The Legions of the Seasons begin to confront one  another openly, and to target the members of the Troupe.

What did the Inspired do?
Are they victims of someone's sinister machinations?
Or of destiny itself?
How can they overcome their unknown enemy?

When this spell is cast the magic user causes a sphere of protection to appear  that will partially shield any undead in its area of effect from harm. It will  also make the undead more effective in combat at the same time.

While in the area of effect any undead will have any damage done to them reduced  by one point per every die that is rolled. In addition they will receive a +2 to  any saving throw that they are required to make. If there are attempts to turn  the undead by a cleric that roll will be made at a -4 and the undead can not be  destroyed while under the spells effect. In addition to the protection the  undead will get a +1 added to all to hit and damage rolls and any saves from  special attacks by the undead will be made at a -2.

Disclaimer: The spells that you will see, for how ever long the write ups last,  were all written up or conceived of back in the 80's so the terminology may not  appropriate for anything other than 1e and depending on how well I did back then  it may be slightly off for that as well. If there is any duplication of spells  that exist now it is most likely I wrote mine first :) Please feel free to  comment on them but try not to be too hard on me. If anyone wishes to use these  in anything they print please let me know in advance and all I ask is proper  credit.
Posted by Wymarc at 5:49 AM

Agone was a game that always intrigued by Agone, too.