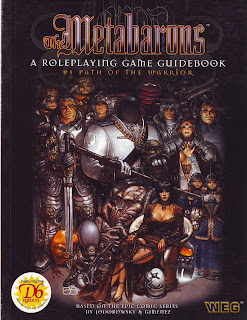 This supplement, "Metabarons RPG Guidebook #1: Path of the Warrior," is the second follow-up to the Metabarons Roleplaying Game Rulebook, released in March, 2001. As in the Metabarons RPG and the original Star Wars RPG, the authors suggest that you do not necessarily play one of the major characters, and instead weave your campaigns around the rich subplots and supporting characters that populate the stories. To that end, they naturally recommend mining the Metabarons comics or trade paperback collections for ideas and source material to fully enhance your game.
Posted by Wymarc at 6:52 AM