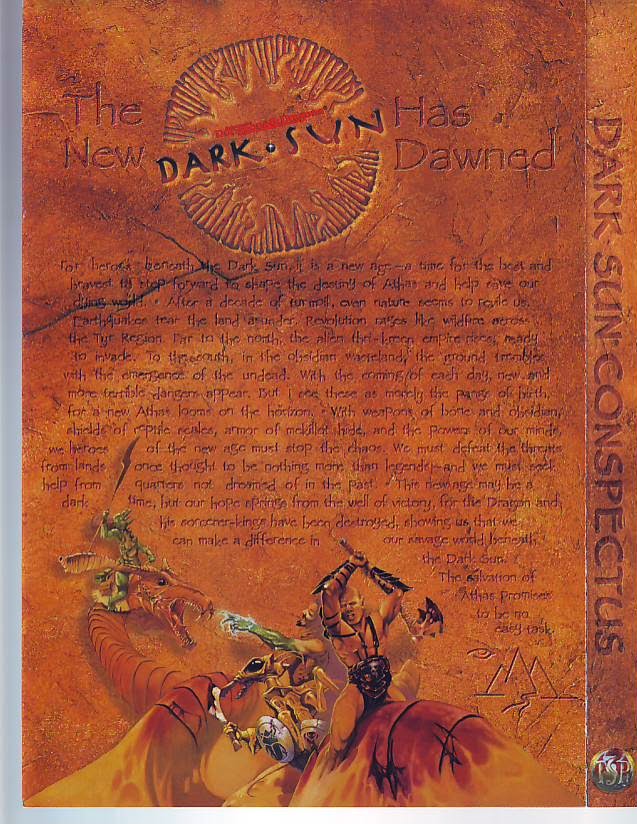 "The DARK SUN campaign world enters an exciting new age with the release of the Expanded and Revised Campaign Setting for Athas, a land of savage adventure where the most powerful AD&D player characters battle to survive and prosper against overwhelming odds. It's a dynamic world of unfolding stories and ancient myteries, full of explosive new role-playing challenges and brutal action. From its volatile political atmosphere to unyielding natural disasters, from terrible new villains to unexpected new allies, from vast stretches of unexplored territory beyond the Tyr region to unparalled oppurtunities to forge a more promising future for the world, never has the DARK SUN setting been more spectacular or thrilling for loyal players - or more accessible to new players daring enough to enter the burning land. With new areas to explore. a streamlined, complete-in-the-box psionics system, new rules, and more, Dark Sun continues to demonstrate its alien and fierce nature. Open the box and see why adventures set beneath the crimson sun are different from those in any other AD&D setting. And watch upcoming products for revelations that point toward Athas's ultimate restoration - or its ultimate destruction. Now, more than ever, the fate of the world depends on the actions of its heroes."