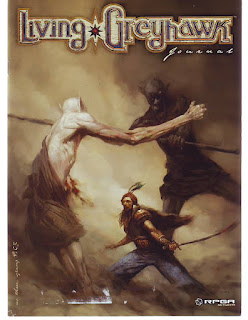 THE BLOOD OF HEROES
Though found in the lower echelons of Oreth’s deific hierarchy, the hero-gods are perhaps the most worldly of superior beings. From humble Daoud to hopeless Vathris, we present more than a dozen godlings for your campaign and for your character to worship.
By Sean K Reynolds, Fred Weining, and Erik Mona

THE GODS OF OERTH
The most complete listing of Flanaess deities ever published, including the pantheons of the elves, dwarves, halflings, and gnomes. If it’s on this list (and it isn’t evil) it can be your patron. Rejoice!

CAMPAIGN NEWS
Playing The Fright at Tristor as part of the LIVING GREYHAWK campaign, a new axe for Ulek, new scenarios, and the latest character creation guidlines.

ENCHIRIDION OF THE FIEND-SAGE
Whether facing an angry tribe of norkers, negotiating a contract with forlorn swordwraiths, or subjecting captured spies to the rigors of the Amedian gutworm, the servants of the Fiend-Sage just keep delivering.
By Sean K Reynolds

DISPATCHES
News from around Flanaess.