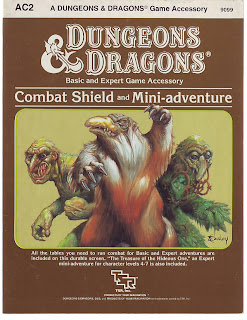 AC2 is a game shield designed for the second edition of the Basic and Expert editions. It is hard to tell the players without a program so I am guessing you can't really call that B/X but it would be BECMI though only working for the B and E portions.It may or may not work with the earlier editions as I have not compared the tables.

In addition to the Combat Shield there is also the mini-adventure. The adventure is an eight page module titled "The Treasure of the Hideous One". It is a fairly straight forward adventure where the players find information suggesting that there is a long hidden treasure in a near by bog. There has been at least one expedition to locate it that ended badly.

After going through a serious of encounters the party can find out the fate of the previous expedition and secure the treasure. The actual treasure is picked by the DM from a list of possible options.  Though not a very elaborate adventure the final encounter might be considered over powered by some.

This was released in 1984 as a stand alone product but it was also included in the 10th Anniversary product that was released at GenCon 17 that was held that year. There were only 1,000 of the 10th Anniversary  Dungeons & Dragons Collector's Sets produced but the print run of the shield alone is unknown. I find it odd that the AD&D game had a screen as early as 1979 but this as far as I can tell is the first TSR published screen for any of the other editions.

By means of this spell the magic user summons to the Prime Material Plane a lesser elemental from one of the four primary elemental planes. The creatures summoned will be true elementals though they will be weaker versions than those summoned by the high level spell.

The summoned elemental will be under the complete control of the summoner and will do anything it is told to do to the best of it's abilities. The control will last as long as the magic user maintains concentration on controlling the elemental. This will preclude the magic user from casting any other spells.

Disclaimer: The spells that you will see, for how ever long the write ups last, were all written up back in the 80's so the terminology may not appropriate for anything other than 1e and depending on how well I did back then it may be slightly off for that as well. If there is any duplication of spells that exist now it is most likely I wrote mine first :) Please feel free to comment on them but try not to be too hard on me. If anyone wishes to use these in anything they print please let me know in advance and all I ask is proper credit.
Posted by Wymarc at 6:00 AM