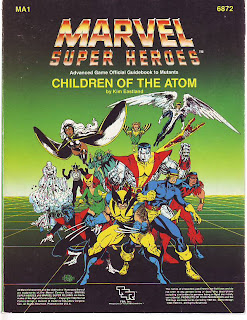 MA1 Children of the Atom was released for the advanced edition of Marvel  Super Heroes in 1986. The book is 96 pages long and was a fairly exhaustive  look at the mutants from Marvel Comics at the time. Today it is a look back  at a simpler time for the poor misunderstood mutant.

The game begins with an explanation of what it is and what mutants are. It  then goes into the reasoning behind why mutants are frowned upon and other  super heroes are not subject to the same prejudice. It then gives an example  layout. This is as follows.

Next we are presented with an index of the mutants and other significant  characters, villains or NPCs that are contained within. The sole exception to  this is an entry for the Danger Room. This gives a rough estimate of 182  entries for heroes, villains and others. The break down begins with Mutant  Teams. As stated earlier this in circa 1986 so there is no entry for  Excalibur and many of the teams listed are no around any more. The list is  below.

Next the book presents us with a section labeled Miscellaneous Mutants. This  section contains some mutants that will later not really qualify to fall  under this section. There are some that still do but are noteworthy anyway.  This section includes among others Black Tom, Dazzler, Legion, Northstar,  Mutant X, Quicksilver, Sabertooth and Scarlet Witch.

The next section labeled Very Important People (VIP) gives information on a  mixed bag of people. These include villains, Supporting Characters and  Aliens. A few of the villains provided are Juggernaut, Arcade, Lady  Deathstrike and Magus. The Supporting Characters section contains information  on noteables such as Cameron Hodge and Moria Mactaggert. The Aliens section  gives us stats for Gladiator and Lilandra as well as a list of many of the  Shi'ar as well as a section on the Starjammers.

The next section labeled The Mutant Menace deals with the fear and hysteria  that surrounds mutants in the Marvel Universe. The section describes Project  Wideawake. It provides statistics for all the Mark I-VI Sentinels as well as  for Nimrod and a few other special Sentinels. There is also information on  the the future time-line from Days of Future Past.

The next section that covers three or four pages goes over Items and  Locations. This section includes items such as the Blackbird and Cerebro. The  Locations section gives brief information on the Mansion and the Danger Room.

The final section is a mini-adventure called  Dreamchild. It is comprised of  seven set encounters and then one floating encounter that can be mixed in  where desired. It is a fair scenario and provides an mix of location and  encounter levels.

This is one of what I would consider the core books one should own if they  play or run MSH. The book is woefully out of date given the Marvel Universe  today but it still provide enough information from the heyday of mutants to  be useful. Plus you get to see Sabertooth listed as a miscellaneous mutant!

Through use of the Dream Vision spell the magic user is able to see a vision of their future. The caster will see the vision while they are casting the spell. The vision is very limited and may or may not be accurate and it is possible to be partially accurate. The caster can see no more than one turn of events. The vision may involve any number of other people but the caster must be present in the dream.

This spell may be cast any time prior to the event the caster wishes to see but it the caster may not want to cast it too far before the event. Once the spell is cast the magic user will lose one of the slots for fifth level spells they can cast until such time the event occurs. The caster may memorize a spell to fill the slot once it becomes available and it will immediately be usable.

The event the caster wants to see must be specifically stated in the casting of the spell. It needs to also be fairly specific in its request. The request could be to see a specific room in a dungeon or castle or perhaps see the location of a specific person at a specific point in time.

The material component of this spell will be a piece of some living creature that is native to the Astral Plane. The material will be consumed with the casting of the spell.

Disclaimer: The spells that you will see, for how ever long the write ups last, were all written up or conceived of back in the 80's so the terminology may not appropriate for anything other than 1e and depending on how well I did back then it may be slightly off for that as well. If there is any duplication of spells that exist now it is most likely I wrote mine first :) Please feel free to comment on them but try not to be too hard on me. If anyone wishes to use these in anything they print please let me know in advance and all I ask is proper credit.
Posted by Wymarc at 6:14 AM