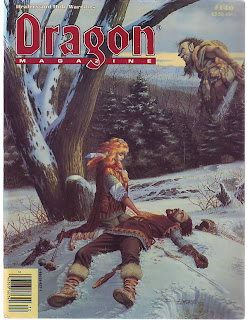 Some time ago I wrote about Dragons #50 and #54. The post on #50 was my first and not very long. The one on #54 I described why it was one of if not my favorite issues. I also spoke about #158 I think it was though that was only in passing as I was really talking about the Deck of Many Things.

Issue #140 is only of note for the cover art. This is my favorite piece of art from Larry Elmore. It may very well be my favorite piece of fantasy art though there are strong contenders for that. There is just something about this that brings to life the story behind what happened. I even have the miniature that was done for this but it does not do it justice.

I will now talk a little about the issue itself. The topic on this issues is Clerics. I can't recall when but they went to theme issues at some point. Not sure the idea is all that great because if I don't care about the theme then I don't care about the issue. At some point between issue #54 and this one things went bad in my mind. I still have almost all of them from till the end of publication but this was in a period where the issues just weren't that strong.

The cleric portions in this issue were not all that good. They offer a new NPC that is at best so-so. They then revisit pantheons (done great in I think #54 as I recall). They then discuss fallacies of clerical healing (huh?) and finally redo the Turning Table which was not really worth the work that was done on it.

In the other portions of the magazine the revamp Weapon Specialization. This was OK but the entire idea of specialization was too munchkin for me and it needed to just be killed. Next of note is the article on expanding the Unearthed Arcana idea of stat rolling. So they take away crap and they expand on crap next? Next is some fiction that was not terrible but no where near other I had read in the pages of earlier issues. Next is a two page write up on Navel Lint...err...I mean knives. Didn't they make fun of  the fixation on Pole-arms somewhere?

Next is the Dragon's Bestiary which finally gives us something that is worthwhile but not all that great. The last area of note is the Reviews area. The Looking Glass (Miniatures) and Role Of Computers (Computer Games) both drag on for way too long but then again maybe I just didn't care and got bored....no it was boring. Then they review some role playing games. I recall the old reviews that had Traveller, DragonQuest, Call of Cthulhu, Paranoia, and all other types of games....this was basically five pages of Forgotten realms ads. They did spend a column and half called "Short and Sweet" where they talked about items for GURPS, Twilight 2000 and DragonQuest but none of them were the academic dissertations on the TSR products.

In the end I guess I just wanted to say that at some point in time between October of 1981 and December of 1988 the magazine switched over from being a classic gaming magazine to whatever it was by #140. Except for the cover and me being a the guy who wants the complete run I should not ever have bothered with this.

When this spell is cast the magic user brings into being a carpet that is  magical in nature. The nature of the carpet can very based on the caster's  desire and the level of the spell.

By default the carpet will be of ornate and of exceptional quality. The  caster can specify a different appearance if desired though it will always  appear to have been a carpet of some quality at one time.

The carpet created will have a maximum size equal to ten square feet per  level of the caster. It will by default fill the space it is cast in though  the caster can specify any shape and size.

The carpet will remain until such time as the effect it is intended to have  is triggered. The triggering effect can be anything that the caster desires.  It can be a timed effect such as one day from now or a specialized event such  as the first thief to walk on it or if a spell is cast by someone while  standing on it. Until such time as the trigger effect occurs the carpet is  nothing more than a carpet. The carpet can be moved with no impact to the  trigger effect unless moving was part of it.

Any individuals on this carpet when the trigger effect occurs will need to  make a saving throw versus Petrification. Those who make their save will not  be affected in any way. Those who fail their save will be turned to stone  just as if they had met the gaze of a Medusa. The effect is not permanent  though. Those affected will remain in the statue like state for seven to  sixteen days. Those affected are completely aware of what happened around  them during their entrapment.

When this carpet is triggered all on it must make a saving throw versus spell.  Those who fail are immobilized but will not perceive themselves in this  state. They instead see themselves as being attacked by what would be the  most logical creature the DM feels would fit from the Random Monster  Encounter tables level VII or up in Appendix C of the DMG.

The players affected will each be attacked by one of these though this is  merely an illusion. Players will see all the other players as being attacked  as well even if a save their save was made. The fight will play out as normal  but if the players lose they fall unconscious with one hit point and can only  be healed by means of magical healing. Disbelieving the attacks entitles them  to another save at +4 but if this save fails the fight becomes one they can  not win.

The material component of this spell is a small woven rug of exceptional  quality. This carpet will cost no less than 100 gp per level of the Carpet  Trap. The rug transforms into the carpet with the casting and is used up. The  appearance of the actual carpet will be whatever the caster desires though it  will always appear to have been so high quality at some point.

Disclaimer: The spells that you will see, for how ever long the write ups  last, were all written up back in the 80's so the terminology may not  appropriate for anything other than 1e and depending on how well I did back  then it may be slightly off for that as well. If there is any duplication of  spells that exist now it is most likely I wrote mine first :) Please feel  free to comment on them but try not to be too hard on me. If anyone wishes to  use these in anything they print please let me know in advance and all I ask  is proper credit.
Posted by Wymarc at 6:24 AM

The change you notice in Dragon Mag at that time is probably the success of AD&D and Gygax leaving the building and then the company. I believe it was around '82 when he went out to California and around '85 or so when he was forced out of the company.