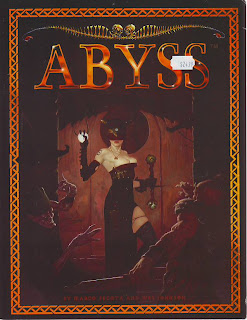 Abyss is a role playing game based in the world of Dante's Inferno. It actually takes place in Hell and the player will be role playing demons. The demons are trying to vie for favor with their specific demonic patron and also move from the ranks of low level minions to the level of rulers themselves. One can only wonder how well this would have been received in the early 80's?

The game was released by Global Games in 1997. It was written and  designed by Marco Precota and Wes Johnson. Global games also  produced the game Inferno which is a tactical war game. The  combat system in Abyss is based on what is used in Inferno. I am  uncertain about how well the idea worked. The overall mechanics  of the game are D6 based were the players get to roll a certain  number of dice and a six signified success and more indicate  greater levels of success.

The character build is accomplished using Soul Points. Again I  have to think how that would have played out back in the era were  TSR had to rename Demons and Devils to use them. There are  archetypes provided but the player can decide to use their own  ideas and the game allows them to be unique in everything from  stats, to spells, to powers and to equipment. Since I think  character generation can be interesting and allow creativity,  and in some games th most fun to be had with it, this appeals to  me.

The cover art is easily recognizable as Brom and that is  something that will make the game stand out to many. The interior  art uses art from Gustav Dore who was already famous for his  illustrations of Hell. The problem is that not all is by Dore and  so the rest is a hit or miss collection. The layout of the text  could be done better. Designers need to really run that portion  of their books by more people. Creative is good but sometimes  simple is better.

I purchased the game to read though and will most likely never  play it. I am not sure I am fully comfortable with the setting  and the material. My fear is that to play demons and devils  correctly will end up not being fun for many and perhaps jarring  to those who play with anyone who can role play it right. For the  right group of players this could be a great game and loads of  fun. I wanted the book for mining purposes.

Below is the material from the back of the book....

Abyss is a roleplaying game set in the fantastic world of Dante's  Inferno.

It is a world of treachery and evil, where violence is a  continual threat and doing a good deed could get you killed.  Powerful Archfiends dominate a world filled with the lost and the  damned, but are themselves dominated by the Lords of the Inferno.  It is a world where absolute evil is mirrored by absolute good.  Even the Lords of the Abyss must heed the servants of the Divine,  or face the Wrath of God and his sword, the Host.

Level: Second
Range: None
Duration: Special
Ares of Effect: One Weapon
Components: V,S
Casting Time: One Round
Saving Throw: None

This spell enchants the magic user's weapon with the ability to  ignore armor while in combat. The spell does not affect the armor  or cause any effect for the weapon is used by others. The spell  only has any affect while the weapon is in use by the caster.

The spell will only ignore actual physical armor. If the target  is wearing items that magically improve their armor class then  these will be applied as if there were no other armor involved.  If there is an item that gives an armor class as if armor was  being worn those items will still work against the weapon.

The spell will remain in effect until the weapon has done a  specific amount of damage. The amount of damage is calculated  using the casters level and intelligence when the spell is cast.  There will be some bookkeeping involved with this spell. The  weapon will bypass armor until it has done damage equal to five  times the casters level plus three times their intelligence.

Disclaimer: The spells that you will see, for how ever long the  write ups last, were all written up or conceived of back in the  80's so the terminology may not appropriate for anything other  than 1e and depending on how well I did back then it may be  slightly off for that as well. If there is any duplication of  spells that exist now it is most likely I wrote mine first :)  Please feel free to comment on them but try not to be too hard on  me. If anyone wishes to use these in anything they print please  let me know in advance and all I ask is proper credit.