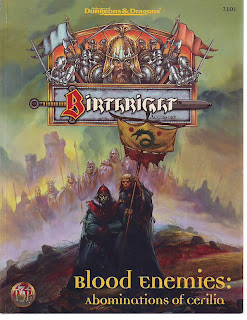 Some may say I am beating a dead horse by saying this but as I have said before the Birthright setting is in my top five of TSR settings and could be as high as two  depending on how the mood strikes me when it comes to rating them. This is not a book  that I have had a chance to use though. IN reviewing it I am not sure I will ever use it  as intended but it is full of material that gets the creative juices flowing. I am sure  some parts of it will be used as written and other parts will at some point serve as  inspiration for items I will build upon and most likely lay claim to them as my own.

Cerilia: Where gods died and kings now rule with divine powers. Where dark powers contaminate flesh and blood, and evil shows its true visage in the abominations that  stalk the land. Where monarchs both true and corrupt clash over rulership of the Birthright campaign world!

This book, designed for the Dungeon Master, is a guide to the most dangerous creatures  on the face of Cerilia: the awnsheghlien. Sovereign creatures of their own realms, these dark creatures wield their power with iron fists, and many seek to tear more power from  weaker leaders. These 128 pages' worth of monstrous dictators and wandering nightmares will strike fear into the hearts of all blooded rulers from the Sea of Storms to the  Isle of the Serpent!