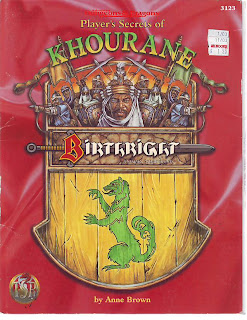 I have said before that the setting of Al-Qadim is one that I find the most interesting to play  in. There is something about the middle eastern setting that simply captures my imagination.  The domain of Khourane comes close to the setting in the Birthright system and if used as a  stand alone campaign I think I would try to incorporate more of the Al-Qadim flavor into  Khourane. That being said Khourane works well on its own without help. This not only has the  advantage of an unusual setting but it also adds a fair mix of political intrigue and conflict.  This would not be my first choice to play as a straight up Birthright domain but it is fairly  high up there. As a domain to adventure in if used a setting it fares even better in the  rankings.

Khourane stands out among the arid Khinasi lands like a blooming lily in a barren field. It  boasts some of the most enviable territory in this corner of the world: mountains, deep  jungles, and a stunning coastline.

These enviable features inevitably lead to conflict, however: The lands are coveted by the  Serpent, the Magian, and the Minotaur. What's more, the elves still resent the humans who claim  control of their hereditary forests.

Combine these problems with fierce trade wars, in a harsh climate, and a missing rule, and the  result is trouble. Khourane needs a new regent in a hurry--is your character ready to face its  challenges? The new rule of this domain will be challenged by some of the greatest problems-- and could realize some of the finest rewards--in all of Cerilia!

This BIRTHRIGHT domain sourcebook is designed for players who wish to take the role of Emir of  Khourane. It may also be used by players seeking to play nobles, servants of the regent, or  adventurers from Khourane.
Posted by Wymarc at 6:11 AM