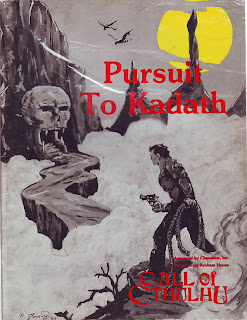 This offering for Call of Cthulhu was released by a company named TOME (Theater of the Mind Enterprises). It was released in 1983 with the product code T-3 and comes in at 76 pages in length. It is again a module that I have not had a chance to run as it slide under my radar when I was playing Call of Cthulhu actively. In total they have five modules with Glozel Est Authentique being the one I have seen the most.

The review I have been able to find online for Pursuit are frankly non-existent. There was a shorter write up for it in White Dwarf #54 which is what I am using for much of the information I have. A good portion of the module is actually background information on Miskatonic University and being a student there. It even includes things such as class schedules and clubs. It also has rules specific for creating students of the university as investigators. In addition to the the rules and the named adventure it also includes a short bonus adventure.
Posted by Wymarc at 7:18 AM