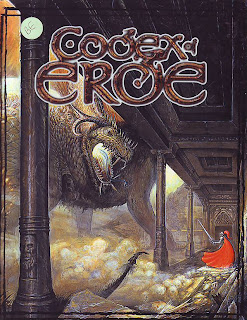 Codex of Erde is an offering from Troll Lord Games. It was released in 2001 under the D20 license for D&D 3.0. It is a campaign setting that harkens back to the early days of the game in some ways. It has an actual connection in that the book includes a short adventure by none other than Gary Gygax himself.  Given the relationship between Gygax and Troll Lord Games I am not surprised by the apparent influence and I wonder how much of it might have actually been directly influenced by Gary himself.

It is a largish book with a total of  256 pages that cover everything from the beginning of the universe, the creation of the world and the role that the gods played in it. It then covers the actual nations of the world as well as providing races, spells and magic items. There are also some changes to the rules of the game as well as new rules.

It has been a good while since I read the book and packed it away in inventory. At the time I recall that I thought it was a worthwhile addition as there was material that could be incorporated into my own blend of a world. The book has since been slated for re-release by Troll Lord Games as the Codex of Aihrde  but that was in early 2012 and it still shows as coming soon. It will be specifically for the Castle & Crusades game which is not a bad thing. I just hope it is not on the same length of schedule as the Castle Keepers Guide!

"Explore a World of Epic Adventure!

Requires the use of the Dungeons & Dragons Player's Handbook, Third Edition, published by Wizards of the Coast.

This book contains everything needed by players and DMs to weave epic tales of heroism in the World of Erde. A detailed history of the world, descriptions of the lands, maps, heraldry, races, languages, deities, classes, spells, magic items, and monsters are found within, and all are fully compatible with the 3rd Edition of the world's most popular fantasy roleplaying game.

Also includes a mini-adventure by Gary Gygax!"
Posted by Wymarc at 8:55 AM