All the King's Men, Rightful Owner 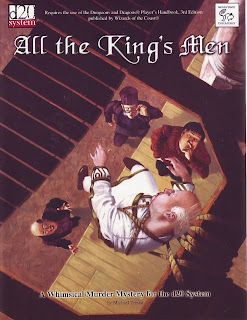 All the King's Men is a murder mystery. Many times these types of modules are  written for lower level characters. This module is written for characters of  seventh to ninth level which opens up the material that can be included.

The premise is pretty straight forward. The acting troupe known as The King's  Men are accused of murdering the archbishop who is well known for his dislike of  actors. The setting is very much a fantasy London and the them of the module is  Shakespearean even to the point that the theater when the performances occur are  the Orb Theater.

The module is written so as to be very non linear even presenting the DM with  two different hooks that can be used to pull the characters into the story.  After these all of the other events (called episodes) can be run in whatever  order the players end up getting to them.

The module has enough combat to make it something that won't bore the players  who like to roll dice. The real charm of the module is the level of role playing  that will be required to make it work. The module is stocked with well written  NPCs that will test the ability of the DM to role play. The story itself is well  done with a plot rich in twists and turns that will make the detective portion  fun as well. The module is also ripe with puns that will be painful to those who  do not like a bad one.

I think the fact that the module is written for higher level characters and is  written in such a way that it is generic enough to let it drop into most any  campaign is a huger set of selling points for the module. By the time characters  reach the levels the module are for they will most likely be thinking about  settling down. What a great means on introduction for a possible kingdom for  them to become involved in.

Filled with bizarre characters, twisted plots, and a macabre sense of humor, All  the King's Men takes the PCs on a wild romp through the dark underbelly of  Hamdon, a fantasy version of renaissance London. When the archbishop turns up  dead at the production of the latest play, the acting troupe known as The King's  Men is accused of murder. It's up to the PCs to track down the killer and prove  the actors' innocence. But not everything is as it seems in the world of acts  and actors.

By means of this spell the magic user will cause any item to return to its  rightful owner. The spell will require that the item be accompanied to make this  possible though.

The item will continue to be invisible and levitate as long as it is in line of  sight and making some progress towards the owner. If there is ever a period of  time where caster falters in their attempt to return the item then it will  immediately return back to its point of origin and the spell is broken. For this  to occur then the caster will have had to have spent more than ten turns doing  something not related to or a result of trying to get the item to the owner.  Time spent resting overnight will not count as time not progressing.

Disclaimer: The spells that you will see, for how ever long the write ups last,  were all written up or conceived of back in the 80's so the terminology may not  appropriate for anything other than 1e and depending on how well I did back then  it may be slightly off for that as well. If there is any duplication of spells  that exist now it is most likely I wrote mine first :) Please feel free to  comment on them but try not to be too hard on me. If anyone wishes to use these  in anything they print please let me know in advance and all I ask is proper  credit.
Posted by Wymarc at 5:41 AM

Ive found murder mysteries impossible to run, especially at these levels. The magic available just short circuits everything. this usually means that the module gimps the pcs or gets absurd in its twists to keep the pcs hopping.

How does this address that?

I didn't pay much attention to non-AD&D modules till I started picking up collections of them on the cheap a few years ago. I never came across this one at all.

Higher level PC's always present problems for a DM, especially high level magic, but there should be ways for NPCs to counteract a good deal of detection and scrying spells. It would depend on the writer's ability to come up with a good plot and knowledge of the game system at that level.