Heroes Magazine #3, The Pen Is Mightier 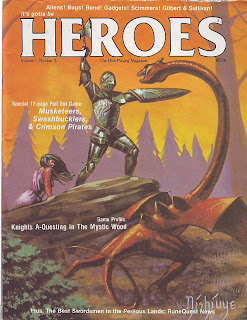 The third issue of Heroes is was a little bit of a let down for me from the  previous two issues. There was a continuation of the ongoing article series on  alien races for Lords of Creation. This has been in all three issues and looking  back this might be something worth review by DMs if they want to expand their  games with different races.

The only real gem in this issue was the Dueling rules for Lords of Creation by  Tom Moldvay. It was presented as a pull out game but I think it could be adapted  for other games. The rules are fairly detailed and since I have not had a chance  to use them I am not sure how much they might slow a game down. They are still  nice to have and it might even be something that could be played as a stand  alone venture as more of a beer and pretzel type of game.

The magazine features a few other articles and though there is nothing that is  terrible there is also nothing that stands out to make me say this is as good an  issue as the other two I have reviewed previously. This is not to say that  another reader may not find a hidden gem for their own uses.

- "Accessories for Agents: The Newest Devices from Q Division" by Greg Gordon
- "Alienating Yourself--Seven Science Fiction Races for Lords of Creation: Part  Two" by Tom Moldvay
- "Creepy Critters: Insects for RuneQuest" by Sandy Petersen
- "James Bond 007: The History of the Game" by Gerry Klug
- "Careful Character Generation in Powers & Perils" by Richard L. Snider
- "Musketeers, Swashbucklers & Crimson Pirates: Dueling Rules for Lords of  Creation" by Tom Moldvay
- "Adventures in the Forest Primeval: Exploring the Mystic Wood" by Matthew  Pirrone
- "Weapon Masters of the Western Lands" by Richard L. Snider and David Kuijt
- "A Ship for RuneQuest: Waertagi Fastship" by Greg Stafford
- "Too Many Monsters" by Craig Barrett
- "How to S.C.I.M Successfully" (Review of S.C.I.M.M.A.R.S. computer game) by  David Kuijt
- "Gaming My Way" by Quentin Long
- "What's What & Where's Where in Glorantha" by Steve List
- "Worldview: Republican Fallacies" by Hal Heydt

The Pen Is Mightier

When this spell is cast the magic user causes all in the area of effect to  suffer damage. The amount of damage suffered will be determined by each victims  lack of mental aptitude.

When the spell is cast DM will need to determine the Intelligence score of all  in the area of effect. Each affected individual will then suffer damage based on  their intelligence subtracted from 18. The damage will be equal to that number  plus  a d6 for each point of difference as well. The victim is entitled to a  saving throw versus the d6 damage and if successful suffers half damage.


Disclaimer: The spells that you will see, for how ever long the write ups last,  were all written up or conceived of back in the 80's so the terminology may not  appropriate for anything other than 1e and depending on how well I did back then  it may be slightly off for that as well. If there is any duplication of spells  that exist now it is most likely I wrote mine first :) Please feel free to  comment on them but try not to be too hard on me. If anyone wishes to use these  in anything they print please let me know in advance and all I ask is proper  credit.
Posted by Wymarc at 5:32 AM