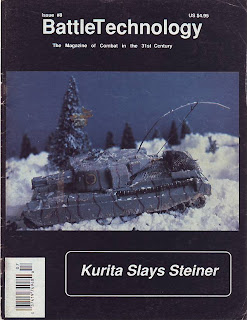 Anyone that has read even a few blogs entries has picked up that I am a sucker for magazines. The argument could be made that almost anything gaming related could replace magazines but they hold a special place in my penchant for printed materials. This apparently holds true even for games I don't play regularly. I give you one of two issues for a magazine dedicated to Battletech I somehow aquired in my desperate attempt to fill a whole in my life with gaming related materials.


BattleTechnology is a magazine that was published irregularly between 1987 and 1995 by Pacific Rim Publishing Company dedicated to BattleTech, a tabletop game of futuristic combat published at the time by FASA Corporation. The magazine includes game scenarios, optional rules, technical specifications for BattleMechs and other units, historical and current events in the fictional BattleTech universe, and short fiction, all of which was approved by FASA. The magazine is considered an official source of optional materials for the game.

BattleTechnology has an 8.5" x 11" format and generally includes about 60 pages per issue. Its subtitle is, "the magazine of combat in the 31st century."
Posted by Wymarc at 11:06 AM