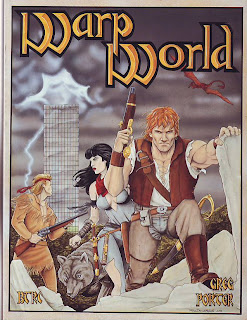 The last of the BTRC entries for right now. I think I have a line on the few missing items I have in the collection so eventually there will (could be) some more entries. There is also apparently a second version of this game. I am not sure if it is different except for how the players begin though. I will also go on record as saying that there is something about the cover to this book that makes it stand out in my mind.

"WarpWorld opens the gates for you to enter this post-holocaust world of magic and lost technology. A world where the gods are real, and mythical creatures tread the silent streets of our ruined cities. A world where we can remember what we have lost, but not well enough to replace it. A world where those with Power bend the forces of nature to their will, and those without carry shotguns and swords instead. Where the bones of the Old World have been picked clean, and those who remain must either create a new order, or slowly sink into barbarism, forever losing what they once had within their grasp. The year is 2312, but no future you ever dreamed of. Prepare to enter the WarpWorld..."
Posted by Wymarc at 6:57 AM