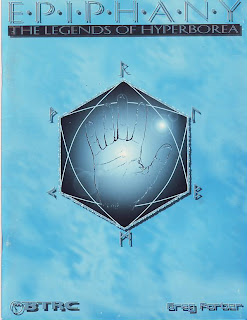 The company that gave us Macho Women with Guns has always been a dirty little pleasure of mine. I don't go out of my way to find things they have put out but when I do I make a point to pick it up eventually. BTRC stands for Blacksburg Tactical Research Center. Almost everything I see has Greg Porter's name on it as well. I am not sure if he solely is BTRC or if he makes a point to be involved in every project so as to get his name on everything! This is not a game I have had a chance to play yet and have only skimmed but I own it because of who it was put out by and not what it is so I may never play it.

Atlantis. Lemuria. Mu. Legendary kingdoms of magic, all now sunk beneath the sea, and despite our science and technology, they remain hidden, so confined to the world of myth.

Maybe people just aren't looking in the right spot. Maybe they did exist in the distant past, in an age of unknown science and magic, but then perished in a cataclysm that hid them in a place where we would never look, and have yet to explore. When they perished, their magic perished with them, the few survivors becoming legends themselves, until their time, like Atlantis, came to a tragic end.

Epiphany is the game of these lost kingdoms and more, worlds of magic, power and intrigue, extinguished by misfortune unimaginable, their inhabitants long since turned to dust. But great were they in their time, and epic the legends of their heroes, legends you can now be a part of. We can only hope that we will also be remembered as such when our age is but a legend, untold thousands of years from now.

Epiphany uses a unique diceless system that works on your character's strengths and weaknesses to resolve everything from debates to duels in a way that keeps the outcome from being a certainty, and that rewards inspiration and cleverness. Epiphany is a shared world, meant for worldwide cooperation and development over the Internet and other on-line services. Be a part of the largest game world ever. Join the Epiphany.
Posted by Wymarc at 8:28 AM