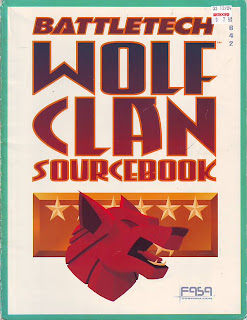 Nearing the end of the BattleTech items. I might actually be able to talk about something I have actually used here soon. I am not sure if there are ever any more of these Clan books or not. This appears to be the only one that I own. Good news for those getting tired of the BattleTech posts.

"In 2784, General Aleksandr Kerensky led his loyal followers out of the Inner Sphere and into exile, far away from the strife and chaos of the Succession Wars.

In 2815, his son Nicholas founded the Clans.

In 3049, the Clans returned to the Inner Sphere, determined to avenge their forefathers and restore the glory of the long-vanished Star League.

This sourcebook gives a complete history and cultural description of Clan Wolf, one of the most prominent Clans and the one that bears the name of Kerensky himself. Included is a post-Tukayyid roster of the Wolf touman and personal profiles of important Wolf leaders."