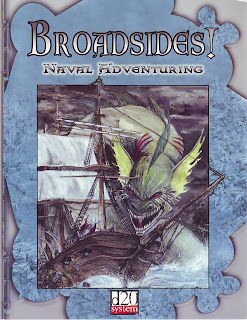 This is a D20 sourcebook I picked up with the intent of never using as a D20 product. Picked it up with the intent of mining it for ideas and converting the information to either 1e or an OSR clone if I happened to be playing them. I have not had the call to do that so I haven't delved too deep into the book yet. It looks promising though.

You can still hear the captain's orders ringing in your ears; "Hard A-Lee, men! We're ridin' her out. We're not lettin' that scallywag get away from us now." You can see the angry gray storm clouds in the distance, and just below them, a frigate flying the purple and black flag of 'Fancy' Paul Durrand. The latest rumors around the crew is that Fancy Paul got his hands on a load of mithril from those dwarven ruins you saw a few days back. That's probably why he's riding so heavily in the water.

You can feel the deck begin to sway as the ship sails closer and closer to the coming storm. The ropes are creaking above you as the sails struggle to hold the rising winds. It's a risk, and you know it, but the captain hasn't let you down yet, and Durrand's worth his weight in gold to the magistrates back home. Yes sir, it will be quite a hefty bounty if you can bring him in, but judging by the storm, this "leisurely jaunt to snag a bounty or two" is becoming an all or nothing proposition. You smile to yourself; this is why you became a sailor in the first place...

Broadsides! is a compendium of Naval Adventure for the D20 System. This book contains:

Rules for adventuring both above and below the waves
Complete tactical rules for ship to ship combat
Rules for playing extended voyages, able to be as complex as day-by-day progress or as simple as a    single roll of the dice
New feats, skills and prestige classes to add more depth to your naval campaign
New spells and rituals to lend more power to the ocean-borne spellcaster
A gallery of NPCs, able to help or hinder any adventuring party
Random encounters usable by any GM to help expand their own naval adventures
New monsters, magic items, and more!