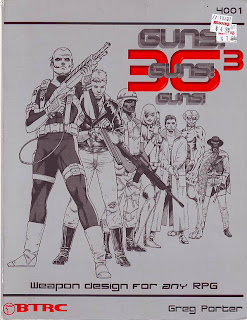 Another in the BTRC collection and another sporting Greg Porter's name. This is one that I think would prove very useful if I were to want to make a mash-up game. One of the problems along that line though is, as I think I may have mentioned in the past, is that I prefer my fantasy to be fantasy....except for my undying love of Shadowrun....go figure. I guess I am more OK with bringing fantasy into the modern world or stripping the technology out and making it mystical (Metamorphosis Alpha) than doing it in reverse. This is still a nice item to have if you want to make a blend though.

Guns!, guns!, guns! (3G³ for short) lets you design custom weapons for virtually any roleplaying game. Design realistic weapons in a universal format, and convert the stats to the system you like best, or even between different systems. In addition to the overall conversion guidelines, there are now detailed conversion notes for Corps, TimeLords, MegaTraveller, Cyberpunk, TORG, GURPS, Twilight: 2000, and the HERO system.

Pick your weapon! You can choose from conventional weapons, rockets, lasers, particle beams, railguns and melee weapons. Detailed directions and step-by-step design sheets help guide you through each aspect of custom weapon design.

Design weapons for any Tech Level where they are possible, not just where they historically appeared. Want to give the Romans machine pistols? Or design lasers for WWII? If it could have been done, or if it might be done, you can do it, in 3G³.
Posted by Wymarc at 7:49 AM

I thought that 3G is a fabulous book but the math always got me down. More Guns, which has a bunch of realized weird weapons was a lot of fun though.