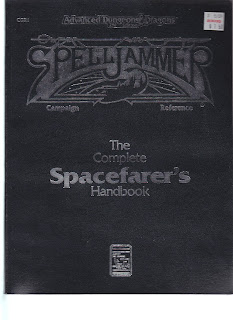 At heart I am a completist. This makes collecting a worse case scenario combination of OCD and money pit. I have stated before that I am not a fan of the splat books and yet I feel compelled to own all of them. There are some that are not as bad as others and some that transcend the "splat" effect.

There are then those that I have and will confess to other than perhaps flipping through when I bought them have never looked at even in the most cursory manner. The Complete Spacefarer's Handbook is one of those. Spelljammer is a game that I was never in love with as an idea and this is a supplement for it.

The lack of interest is fairly odd since I like the idea of Space 1889 and like Steampunk. Even then those are hard science fiction games or genres just set in different periods. There is also the fact that we have literary precedent for them with Wells, Verne and ERB. I think Spelljammer was the first of its kind. In the end I guess I like my sci-fi and my fantasy a little more distinct than this.

As I have said in the past there is usually something good that can be gleaned from almost any module, rulebook or accessory and I am sure this is the case with the Complete Spacefarer's Handbook. At some point I will round up all the Spelljammer stuff and float around the void with Githyanki and Mind Flayers but until then I think I will go find some kobolds to kill in the dungeon.

Through use of this spell the magic user is able to cause the target to loose the ability to produce sound. This spell can be cast on any living creature to different effect.

The spell can be used to silence a single shrieker or even stop for the duration the wail of a Banshee. The real purpose of the spell though is to disrupt the ability of another spell caster. This spell will prevent spells from being cast provided that they have some verbal component.

When this spell is cast the victim is entitled to a saving through. If made they have prevented the spell from taking effect. If they were in the middle of casting a spell though this will have disrupted that spell. The spell is not lost but they will need to begin casting it again.

Disclaimer: The spells that you will see, for how ever long the write ups last, were all written up or conceived of back in the 80's so the terminology may not appropriate for anything other than 1e and depending on how well I did back then it may be slightly off for that as well. If there is any duplication of spells that exist now it is most likely I wrote mine first :) Please feel free to comment on them but try not to be too hard on me. If anyone wishes to use these in anything they print please let me know in advance and all I ask is proper credit.
Posted by Wymarc at 5:49 AM

I feel for you, completist. I went through the same thing for different games.