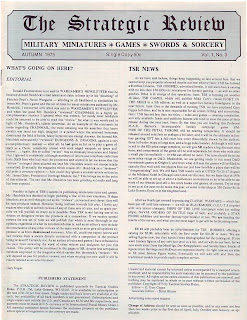 This would most likely fall closer to the zine/newsletter realm than a magazine. It is a total of eight pages long and 25% of it consists of news about the company and upcoming products. The list of products at the end reads like a who's who of things I would like to get my hands on today.

There are some interesting articles in it though. The first is a list of new monsters for the Dungeons & Dragons game. Creatures that are staples today were first introduced here. We get stats for Shriekers, Shambling Mounds, Piercers and Lurker Aboves as well as five others.

There is also a section that may have been the first attempt at an April Fools article. As an aside i never much cared for the April Fools issues though the one that gave stats for Bugs Bunny was not terrible for that reason. The article here describes the various types of Weregamers. I won't go into detail.

There is then an article on Napoleonics and this may or may not be serious. Never having been much of a wargamer I am not sure if 5mm Napoleonics is a real size or not. There is also an article called Wargamming World which seems to be an update on whats new in war games.

The final two and a half pages are role playing related in some manner. There is a section Gallery of Gunfighters with an article called The Art of Gunfighting. There is then what you start to think is a filk song called The Unicorn Song. It ends up being what might be another joke or April Fools issue entry. The next item is called Mapping the Dungeon. It is D&D news and amazingly a list of Dungeon Masters (called Gamemasters here). It is hard to imagine a time when something like this was needed. The final article is perhaps the best. It is by Jim Ward and deals with Deserted Cities of Mars.

As I have said before I sometimes think I am the Smaug of old magazines. I really do enjoy looking back at old issues and thinking how exciting those times must have been. How great it must have been to open your mail and find a new creature The Wind Walker to throw at your friends for the first time.

Through use of this spell the caster grants themselves and a number of other creatures based on their level enhanced movement capabilities. The recipients of this spell will be able to spring great distances in place of walking.

The spell does not increase the movement rate of the individuals. It instead allows them to move their entire normal movement rate in a single step. This movement is similar to what is seen in grasshoppers and similar types of insects.

The recipient is not required to move in this manner and can walk or run as normal. If desired though they can leap a distance equal to their normal movement rate instead of walking/running it. Since there is a springing motion the DM will need to take into account any restraints that might occur due to ceiling heights and such.

The material component of this spell is the leg of a grasshopper. Each recipient of the spell must consume one such leg while the spell is being cast.

I know how you feel about the thrill of those days. Not long ago I found some old RPGA Polyhedrons that a shop was going to throw out! I scooped them up like a dragon on wing.

Great find n the Polyhedrons. I really wish TSR.WotC/Hasbro or whoever they are now would do a Dragon Magazine Archive treatment on both the Polyhedron and Dungeon but that will most likely never happen!