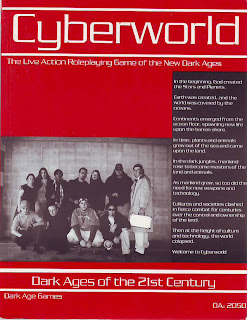 Sometimes when you are looking at things to buy on eBay you make assumptions  about them. these often pay off and you buy things and they come to be better  than you ever thought they would and in some cases it does not work out so  well. In some cases you find that you were not even in the same ballpark as  to what you thought the item was.

Cyberworld is not a product for the Cyberpunk game system as I had in my mind  when I saw it on eBay and bid on it. . Cyberworld is a rulebook from Dark Age  Games. It deals with the same setting topics as Cyberpunk does but there are  a few differences. Maybe more than a few as Cyberworld is a Live Action Role  Playing system for as many of you may know them a LARP. This is not what I  expected and not anything I would normally have bought.

LARPs have been around for a long time. I know they were doing them in some  fashion before the Minds Eye Theater system from White Wolf brought the  Vampire LARP to the fore. If we are honest "Cowboys and Indians" is perhaps a  LARP though I am not sure what are the absolute defining qualities.

Cyberworld is a LARP of the New Dark Ages. One where society has collapsed in  the 21st Century. I really know nothing more than that about this book that I  have owned for a few years or perhaps more. IN doing a bit of research it  appears it  was released in 1995 and is 222 pages long. There is a review  here that is not very  good.

I have nothing against LARPing or the LARPers themselves. It is just not something I could bring myself to do as I am not sure the real world wants them there and sometimes they can be pushy, loud and attention starved.  Having done a bit of theater in high school and being a role player it is  hard to hate the idea. I even for a brief period of time thought of getting a  job with a RenFair (being a carnie for the artsy crowd) but real life  intervened. When attending conventions seeing the people in costume is great  and many are out of this world in quality and creativity. Steampunk may be my  favorite but it is also the most common now. LARPs are OK if they don't  standout too much and disrupt the flow of the real world. Gamers have a stigma already at times and I am not sure LARPs help.

This spell is in most ways similar to the sixth level magic user spell  Reincarnation. By means of this spell the magic user is able to bring a  living being in a new form which will half the time be the same as their  previous incarnation.

If they come back as a new race they will not roll again as under the normal  spell as this could result in the same species and it must be different. The  DM will now roll a d8 and count up or down on the Reincarnation table. If the  roll is one to four they move up and five to eight they move down. The number  of spaces is the number rolled. The list is below.

The material component for this spell will be different than the  Reincarnation spell. The component will be any randomization device, such as  dice, suspended in crystal. If the race stayed the same the crystal is assumed  to not have broken and the component may be reused. If not then it is assumed  to have broken or cracked and must be replaced. The cost to have this done  should not be less than 100 gold.

Disclaimer: The spells that you will see, for how ever long the write ups  last, were all written up or conceived of back in the 80's so the terminology  may not appropriate for anything other than 1e and depending on how well I  did back then it may be slightly off for that as well. If there is any  duplication of spells that exist now it is most likely I wrote mine first :)  Please feel free to comment on them but try not to be too hard on me. If  anyone wishes to use these in anything they print please let me know in  advance and all I ask is proper credit.
Posted by Wymarc at 8:05 AM