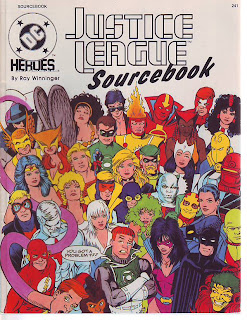 As a kid I was never all that much into comics. I am not sure why that was  the case. I found them in my early teens though and was immediately drawn to  the Marvel line of comics. I think it was the "What if?" series that was the  deal make as I have always like alternative history fiction and such. I say  this to point out that anything I get in the way of DC in relation to gaming  opens up new vistas to me.

As an aside I feel compelled to point out that the cover for this book is one  of my favorite super hero game covers of all time. Not sure why but I suspect  it is the Guy Gardner comment :)

The Justice League Sourcebook is exactly what it says it is. I have written  on a number of similar type titles on the other side and thought it was time  for some equal time for DC. This book gives the GM background material as  well as hero information for use in a DCH game. The book was written for the  second edition but can be used with the first with little effort.

After a brief introduction the book is broken down into a number of chapters.  The first of these is a section on the history of the JLA. The history is  very complete and it was from this I learned that the founding member of JLA  were J'Onn J'Onzz (Martian Manhunter), Green Lantern, Flash, Aquaman and  Black Canary. One item to note though is that this is based on post Crisis DC  history so some things will seem off to even the most casual comic historian.

The next section is entitles "The Leaguers". It gives an entry for every hero  that has ever belonged to the JLA. The list is a little different as it is  presented in chronological order as to when they joined regardless of current  status. This makes finding a particular character a little harder but it is  nice in that you can track the evolution of the team just by flipping through  this section.

The book was published in 1990 so there is twenty-one years of history that  is not present so that needs to be taken into account. When published there  had been thirty-seven members of the League. The last character to have  joined when this was published is Crimson Fox. The character descriptions give  not only game stats but great game play information such as their motivation,  quote they might be famous for a fair bit on their background and finally an  explanation of their personality.

The next section is called "How It Works". This covers the inner workings of  the Justice League as well as the membership process. This is not a long  section but it is one that packs quite a bit of information that may or may  not be compiled in any other location. It goes over the charter that explains  the membership level, policies governing secret identities. It also addresses  the right of membership and disciplinary procedure for when rules are  violated. The reading is a bit dry but this could be used for gaming purposes  very easily in creating situation that might affect the League.

The next section goes over "Friends and Allies". This gives the GM  information on the NPCs that those in the League would most likely have some  level of interaction with. Some of these will be characters with minor powers  or in some cases civilians. The section is also notable in that it has  statistics on the three reserve members of the JLA that can be called upon as  needed. These are Superman, Big Barda and The Creeper. Please refer to the  comment about being post Crisis if you are wondering why Supes is only a  reserve member.

The fifth section is the one that may get the most use by the GM. This cover  the reason there is a need for the heroes at all. This the the section labels  "The Bad Guys". This covers the villains that the JLA had need to deal with  during its history. I can't say if this is in chronological order though but  it does start with the group they fought that initiated the founding of the  league. The section includes individual villains they have faced and a number  of teams that they have needed to contend with. One of the issues I have had  with DC is the villains. In my mind they have seemed a little more silly than  Marvel villains but that is most likely just my perception. There are quite a  few entries here so the GM will have no loss of antagonists.

Next we are given information on the locations that the JLA have called home  over the years. It starts with their headquarters "The Secret Sanctuary". In  addition to the description we are give a nice cut away view that also morphs  in actual maps in some areas. It is a little confusing but interesting. We  are presented with a full blown map of the JLA Satellite which was their base  of operations after the sanctuary had to be abandoned though the Satellite  feel to earth during the first Crisis. It also covers the short lived Bunker  in Detroit and their new floating bases the JLA Embassies that are present in  every UN member country. Maps are provided for the American and Saudi Arabian  embassies.

The final two chapters cover the Justice League gadgets and new Powers,  Advantages and Drawbacks that can be used in the game. The gadgets section  covers the common items connected with the League but also contains quite an  extensive write up on Green Arrows arrows. Having been a fan of bow using  heroes across all publishers this was a welcome surprise. The last two pages  are an index which is nice due to the chronological nature of the listings  and an explanation on how to use this book which might have deserved to be  near the front.

In summary another great sourcebook for those wanting to play in the DC  universe. I am not sure if a more up to date product exists but this is a  good item to have even if there is. One item of note is that art is a little  sparse. The book is 128 pages long and is chock full of information so the  lack of gratuitous art can be overlooked since they did get Power Girl in there.

This spell is an upgrade to the Invisibility spell with special limitations and advantages. Unlike the base spell this may only be cast on the magic user themselves.

This spell will enable the caster to become visible and invisible at will while the spell is in effect. There is no delay in this ability and the caster will wink in and out of sight as desired.

The spell carries the same limitations as the original as to what actions will break the spell such as the caster attacking someone. The spell is also subject to changes in location. The spell if cast while indoors will remain in effect until the caster were to go outdoors. the spells works the same if cast outdoors as well.

The material component of this spell is same as that of the second level Invisibility spell.

Disclaimer: The spells that you will see, for how ever long the write ups last, were all written up or conceived of back in the 80's so the terminology may not appropriate for anything other than 1e and depending on how well I did back then it may be slightly off for that as well. If there is any duplication of spells that exist now it is most likely I wrote mine first :) Please feel free to comment on them but try not to be too hard on me. If anyone wishes to use these in anything they print please let me know in advance and all I ask is proper credit.
Posted by Wymarc at 6:35 AM

I'm a lifelong DC fan, and I bought each and every Mayfair game supplement...but I've never once played the actual game.

I got them because DC Editorial worked hand in hand with Mayfair to make the sourcebooks extra complete. There'd be world details and tidbits that never made it into the comics proper (see the DC Atlas), and that thrilled me.

It still breaks my heart that the Flash sourcebook never saw print.

I own many of them as well. Being a marvel fan they DC books are like getting caught up without having to read a ton of back issues.

I noticed that the book reported that the interior art was done by DC staff. I did not know if that was normal but based on your comment maybe it was.

Was the Flash sourcebook written but never printed? Wonder if it might be possible to get the book released electronically?