C1 - The Hidden Shrin of Tamoachan 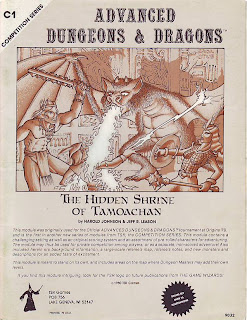 One of the classic monochrome modules from the early days of the game. This was originally used as a tournament module at Origins in 1979. This was rated #18 in the top 30 modules/adventures of all time in Dungeon magazine. I played this back in the early 80s and still remember the adventure today though most of the details have faded. It is an adventure that is trap heavy. This is easy enough to explain away though in real terms since it is a tournament module and you need to have traps to gauge thinking and to penalize foolishness. In the setting think of how pyramids are portrayed and you see what I mean. I also remember that the names were very exotic in nature. This module is overshadowed by The Tomb of Horrors but given the right DM I think this could rival it.

"This module was originally used for the Official Advanced Dungeons & Dragons tournament at Origins '79, and is the first in another new series of modules from TSR, the COMPETITION SERIES. This module contains a challenging setting as well as an original scoring system and an assortment of pre-rolled characters for adventuring. The module may thus be used for private competition among players, or as a separate, non-scored adventure! also include herein are background information, a large-scale referee's map, referee's notes, and new monsters and descriptions for an added taste of excitement.

This module is meant to stand on its own, and includes areas on the map where Dungeon masters may add their own levels."
Posted by Wymarc at 7:00 AM