CoC - Beyond the Montains of Madness 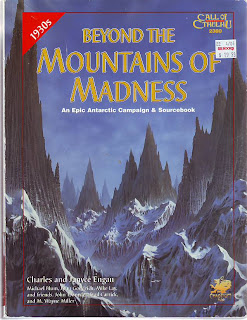 I there needed to be an official benchmark for well written modules/campaigns this would most likely be on the shortlist. Long before "big books" became the thing to put out this baby was there. It clocks in at 440 pages and includes enough gaming material to keep a party busy for about as long as a real Antarctic expedition might take.

Though "At the Mountains of Madness" is not my favorite Lovecraft story this module ranks among my favorite Call of Cthulhu modules. Also let me say that "not my favorite Lovecraft" does not mean to take too much away from the story itself. For a long time this was a hard book to get but it was recently reprinted if I am not mistaken which makes it less hard to find but I am not sure if the cost has dropped to a reasonable level yet. If you get a chance to experience this adventure do yourself a favor and make it happen.

"An epic Antarctic campaign and sourcebook for 1930s Call of Cthulhu.

one of my personal favorites!


I'm jealous. Didn't know they reprinted it, but I've always wanted to get a copy and the high prices have always put me off.

The story is one of my favorite Lovecraft stories. He knew how to take something that could be ruined by science fiction mundanity (which was a failing of Arthur C. Clarke) and make it occult and frightening.

By the way, I'm noy a Robot