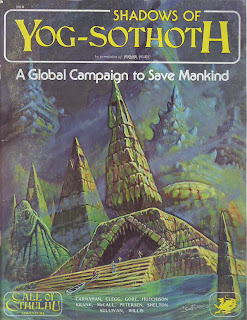 This has the honor, to the best of my knowledge, as being the first supplement/module released for the Call of Cthulhu game system. It was released in 1982 the year after the original game was released. It set off with some lowly ambitions as well, a global campaign to save mankind. I will leave it to the gentle reader to decide on their own if mankind deserves to be saved or not.

The book clocks in at 72 pages and contains a total of seventy-two pages. The campaign consists of seven intertwined adventures. These are all well done and will keep all investigators happy at some point in the adventure. It mixes up action, investigation, mystery and horror quite well. The early adventures for Call of Cthulhu seems to reflect the stories much better in that they built up to horrors in a slow burn where the investigators started out thinking it was something much less dire than it ended up being.

A book well worth having for both historical reasons as well as for the content.

The Silver Twilight is an international organization dedicated to the destruction of mankind. As brave investigators, you must piece together passages from esoteric books, shards of ancient artifacts and puzzling letters to discover the Silver Twilight's loathsome goals. This multi-chapter adventure begins in Boston and spans the globe. The Investigators must survive and conquer the mind-shattering monsters and minions of the Cthulhu mythos. Come, journey through the awesome realms of reality and match your wits and sanity against diabolical lurkers in SHADOWS OF YOG-SOTHOTH!
Posted by Wymarc at 6:14 AM