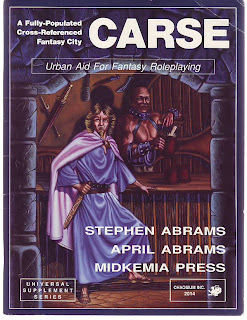 City products have always been a weakness of mine. If I come across one that looks like it has any value at all I will eventually end up owning it. I attribute this to my first city based product being none other than the City State of the Invincible Overlord.

This version of Carse is actually the second version. The first was released in 1980 by Midkemia Press. This is a version that was licensed from that group by Chaosium. The earlier version of Carse is one that I am still looking for and will own when I can find it for slightly less than a King's ransom.This product was released in 1986 and I have not had a chance to compare the products.

"Designed for all fantasy roleplaying systems, Carse is a home base for adventurers. With it, gamemasters present adventures normally, using CARSE to locate shipbuilders, outfitters, armorers, ins, sorcerers, and all the other delights which player-characters demand.

"Nearly one hundred kinds of businesses and professions are noted; in all, about 450 buildings and four major complexes have been populated and discussed.

"But Carse is much more than a medieval shopping mall. A lively city-state, romantic intrigue and secret societies abound here, each with its own prescription for love or power, and each in turn shadowed or hounded by the operative of Baron Bogardis IV, capable ruler of Carse. Gamemasters can use it sub-plots and random encounters to generate new scenarios. Lovers, thieves, thugs, loonies, and even a few honest folk strut down byways where personal schemes and family connections are all-important, yet who can say whether it is good or ill to be known by such residents as the Troons or the Hazara Khans?"
Posted by Wymarc at 6:39 AM