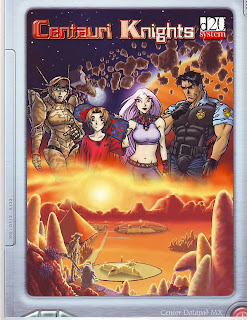 Not sure where I got this. It was either in a box lot off of eBay or a box lot of games I bought at Origins one year. I have very little BESM material and most of it is Tri-Stat and not the D20 variety. I know i have never even cracked the cover on this. I offer material from other sites below.

At the dawn of the 22nd century, mankind has colonized the Alpha Centauri system, but the discovery of alien ruins leads to conflict between rival human factions. As the UN battles terrorists and prepares for all-out war, a sleeping alien power is awakening that threatens the lives of everyone in the solar system. This campaign world for the Big Eyes, Small Mouth d20 role-playing game features a complex, hard-science future, detailed descriptions of the people and organizations of Alpha Centauri, and d20 Mecha stats for dozens of spacecraft, vehicles, and servopanzer designs.


A hard science fiction setting for Big Eyes, Small Mouth set in the Alpha Centauri system. On the planet Osiris, colonists discover the ruins of an alien civilization, shrouded in an unatural fog. The fog turns out to be airborne nanites, used by the ancient Osirans to build tools, toys and furniture as and when they needed. Jewels uncovered in the ruins are found to control the utility fog, which fact is useful to the rebels seeking independence from the UN and the Centauri Consortium.

The book covers character generation for the setting, with templates for cyborgs, AI, colonists, activists, xenosurgeons, fog witches, xeno-archaeologists and others. The Technology chapter covers nanotechnology, colonial equipment, weapons, mecha, and vehicles, including Osiran artifacts, xenomechs and xenoplagues made by the utility fog. Maps and descriptions are given for the Alpha Centauri system, with a run-down of the organizations involved in-system.
Posted by Wymarc at 8:55 AM