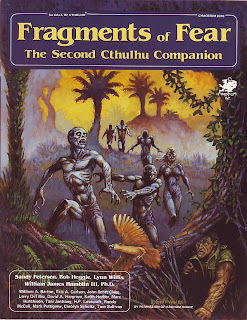 The second companion to the Call of Cthulhu game provides the GM with a fair bit of information but the second companion is not as large as the first. The material in this does not really reach the level of that which was in the first one either. This is still a good item to have if you can find it at a reasonable price. Being released in 1985 it is coming up on being thirty years old and it will eventually become harder and harder to find so if you are a completest like I am the sooner the better.

"Call of Cthulhu Questions Answered - Why does it take so long to read a Mythos tome? Why can't my investigator get 'used to' seeing common types of monsters? How do I learn a language in Call of Cthulhu? Must my character lose multiple Sanity for seeing multiple monsters?

A Cthulhu Grimoire - Working summaries of all the spells from supplements Shadows of Yog-Sothoth, The Asylum, Cthulhu Companion, The Fungi from Yuggoth, Curse of the Chthonians, Trail of Tsathogghua, Masks of Nyarlathotep, and Fragments of Fear. Indispensible to keepers; deservedly horrifying to peeping players.

Scenario - The Underground Menace - Earthquakes hammer a hamlet in northern Michigan, but the townsfolk refuse to talk about the matter.

Scenario - The Hidden Valley - a dangerous quest leads the intrepid investigators into the 'heart of darkness' of the Belgian Congo jungles. This adventure may take several sessions to complete.