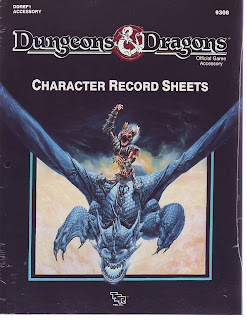 Sorry for what may be the first in what I would call lazy posts that I will most likely be doing for maybe a week or so. Hope everyone will bear with me.

DDREF1 was the latest flavor of Character Record Sheets released by TSR for the D&D game back in 1991. There were 24 character sheets in the package. I am not sure that there is anything so different in these that would make them a necessity. The cover art is good though. These will work if you are looking for character sheets from that era though almost any of the previous versions would as well.


From the back of the package:

Three trolls - hot, hungry, and bothered - are breathing down your neck in a dead-end catacomb. Is this the end of the line for your noble hero?

Of course not! With an official D&D Game Character Record Sheet, you know exactly where to look for that wand of fire balls. All of your character's essential information is ready at a glance, right where you need it, when you need it.

Don't wait for disaster to strike! Let these 24 colorful character record sheets make you the most organized player in your campaign.

When this spell is cast the magic user causes the target creature to be engulfed in an aura of black flames. The flames are actually raw material from the Negative Material Plane. Though they have no heat associated with them the effects are much worse than flame damage.

When the flames engulf the target the DM will need to roll a D6 for each of the targets attributes. The target will have the die roll for each attribute removed from the attribute. The points lost in this manner will be recovered at a rate of one point per attribute per day.

After the points lost per attribute have been calculated the target will then suffer damage based on that number. The target will lose 2 points per point of attribute lost. The target will be able to make a saving throw for half damage. The damage done will not heal at a normal rate. The caster will only recover if healed magically and any healing done is halved.

Finally the target will age 1 year per point of attribute lost. The years lost can only be restored by use of Wish spell or similar level magic.

Disclaimer: The spells that you will see, for how ever long the write ups last, were all written up or conceived of back in the 80's so the terminology may not appropriate for anything other than 1e and depending on how well I did back then it may be slightly off for that as well. If there is any duplication of spells that exist now it is most likely I wrote mine first :) Please feel free to comment on them but try not to be too hard on me. If anyone wishes to use these in anything they print please let me know in advance and all I ask is proper credit.
Posted by Wymarc at 4:47 AM