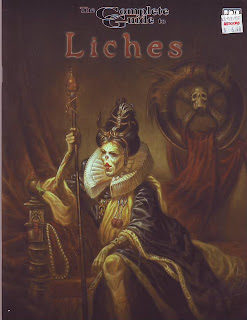 The Complete Guide series from Goodman Games is one of the lines of products that I do thank the D20 and/or OGL for allowing the market to create. I am not sure that if the flood gates had not been opened to allow almost anyone to publish almost anything that products like the Complete line may not have happened. I was a fan of the old Ecology articles in Dragon magazine so these were a natural hit with me.

This product deals with one of the most dangerous and deadly of the undead but also one of the least understood. It was released originally in 2003 under the 3.0 system at 48 pages. It was then released again under 3.5 in 2005 at 64 pages. I have not had a chance to compare them to see if the differences make one better or if it was not merely a change in layout and art. The version pictured above is the 2003 version. The later printing sports a gold border around the cover.

Do traces of humanity remain after a spellcaster's transformation into a lich? The answer is yes. This guide to liches humanizes the evil monster that has traditionally been relegated to the lowest levels of dank, dark dungeons.

Necromancers pursue the path to lichdom for many reasons. Some are truly evil with dark plans that will take centuries to complete. But others are looking for nothing more than immortality. The transformation to lichdom is shrouded in mystery and secrecy, and few who undertake the process fully understand all the implications. Many are completely unaware that the enigmatic rituals that promise immortality may have sinister side effects. Thus it is possible that some liches were once paladins pursuing a centuries-long plan of good, or researchers who only wanted a few more years to complete their studies. Over time, the necromantic energies of the creation rituals corrupted them, and now they are evil liches... but the spark of humanity remains.

The Complete Guide to Liches introduces the concept of the redeemed lich, who has sloughed off his undead life of evil, and the philolich, a mortal lover reanimated by her lich companion to keep him company as he whiles away his centuries. The "typical" lich is examined in detail, along with several new varieties, including the monstrously powerful drowlich and the time-challenged novalich (whose more limited creation rituals give him but one year to complete a specific task).