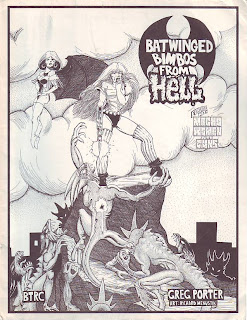 One of the daring sequels to "Macho Women with Guns". It continues were all that proceeded it left off. It expands the exploitation genre just a little bit more. I am not sure these would be made new today. Instead we have the entire BESM anime genre of games. I guess I like my exploitation a little more 70's prison moviesque. If you can take them tongue in cheek and play them as more a beer and pretzel type game they really are not too terrible.

Beastmaster will never go down as an art film. It was a good B-movie though. I have to think that for anyone who plays a Hunter in World of Warcraft has to thank this movie for the ability to have animal pets. I know after seeing this move most players wanted to have some sort of smart animal pet. It also has a young Tanya Roberts running around in various levels of clothing or lack there of. I still watch this if I ever see it is on. I am not sure about Marc Singer or Rip Torn but it gets the Sword & Sorcery juices flowing.

Blindness begins striking large numbers of the village, town or city inhabitants where the players find themselves. This may even strike one of the players if the DM feels particularly mean. The blindness can be cured by your normal clerical Cure Blindness but the condition will often reoccur within a day or two. This has had a positive effect on the coffers of the local church or churches. The effect could be something environmental or is it perhaps agents of a chaos deity using a minor artifact that causes blindness to disrupt local events for some reason...

Breggar's Books come in three varieties and may be found as a set or individually. Bregnar was a diplomat for a long forgotten king who began his career as a scribe then mage. Though very intelligent and creative he was also lazy and very suspicious. Each book will have 101 to 200 pages though there may be copies were pages have been removed.

The first version of the books is one desired by scribes. The first type of book which will copy any non magical written material it is placed within a foot of. This owner needs to but invoke the item and the book will fill its pages with any written materials near it. The owner cna then using another command have the book transcribe its contents to other papers either clearing the book or allowing it to keep the contents.

The second book is one favored by diplomats and spies. This books will appear to be a journal or other standard fair and is filled with boring content about various events. In reality the book is a voice recorder. The book can be left in a room and will record any words spoken within a 100 foot radius of it. The book will record the spoken words in the native language of the person it is attuned to.

Finally there is a chance that anywhere from 21 to 40 loose pages of any of these books can be found having been torn loose from the books. These pages will sometime be a mixture of any two or all three books. The act of tearing out pages will not harm the book though and empty book is just that. There is a 5% per page that when torn out the magic is destroyed.
Posted by Wymarc at 5:18 AM