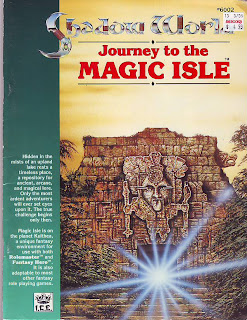 Journey to the Magic Isle is one of the location modules for the Shadow World campaign setting. There were a number of these made and though I don't have all of them all the ones I do have have been excellent in quality. This book deals a secret magic academy and the hidden isle it is located on. In addition to being a location guide it also has different adventures that the DM can use that are set in or connected with the isle and the academy. Over all and in particular I would advise at least getting a chance to review this book. I am sure that it can be stripped for ideas if not sued outright.

Jason and the Argonauts is one of those movies that I know helped shape my love of mythology and that would eventually lead me into role playing games. I am not sure I like this as much as I did the Sinbad movies but it is a darn close call. Regardless of which ones you prefer these all have the classic storylines that all most all adventures can be formulated around.  I know that the special effects on these old movies can't compete with the CGI world of today's movies but I think that for hear they run laps around them. If you have a free Saturday afternoon why not grab one of these from your local video store, make up a giant tub of popcorn and get ready to be inspired to game.

Judges arrive in town to investigate the death of one of the local nobility or their family. When things like this happen it can only mean that the adventurers are in town and things are going to happen to them. It will play out in one of two ways. The first is that one of the characters will be falsely accused of the crime (hopefully they didn't really do it) and the character whose player did not make it that week is taken into chains and the others must find a way to clear their name and get them freed. The other most likely way it can play out is that the players are needed to track down the accused and bring them to justice. The party can rest well knowing that the brought the right person to justice....can't they?

Jumping Jacks will resemble the child's toy jack though these are about 2-3 times the size of the normal jacks. Even normal toy jacks by nature, as any parent can attest, serve well as a poor mans caltrop. Jumping Jacks because of their larger size will be even more effective. Anyone stepping one one of these will suffer 2-5 (d4+1) points of damage. The real nature of these will then be discovered. Once stepped on the jack immediately springs into the air with great force. This will require the person that stepped on them to save versus dexterity at a minus equal to the amount of damage they took. Those who fail will fall to the ground due to the loss of balance and will spend X number of rounds regaining their feet and their bearings. The X will be one the number they failed their save by with a minimum of one. The racket from this will allow all in range a chance to detect the event at double the normal rate of success. Once activated the Jumping Jack becomes non magical in nature. There will be anywhere from 21 to 40 Jumping Jacks normally found at any given time.
Posted by Wymarc at 6:52 AM