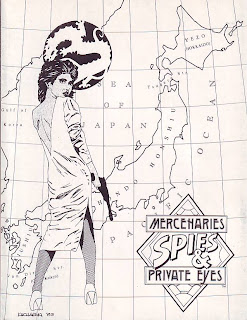 Mercenaries, Spies and Private Eyes (MSPE) has gone through a number of publishers and editions. I am not sure exactly what version this is now as it is packed away. I am thinking that this is the earlier edition that was released in 1983 by Blade which is a division of Flying Buffalo who published Tunnels & Trolls. The MSPE is is loosely based on the T&T system though it is distinct enough I would not call it  part of that system. This game is very fun and never got the credit that it deserved in my humble opinion. I think it suffered from being published by a smaller game company and not being in a niche that had a lot of appeal to begin with. By that I mean there are other games that specialize in settings that this could cover where this was more broad spectrum of a number of sub genres. Still if you have a chance pick up a copy and give it a try.

Mad Max is the first movie in a series that is most better known for the second and third in the series. The best was most likely the second though I think the Mad Max is more of a dystopian future move and the second is all post apocalyptic. The two are not always separate genres but can be different types of movies. I think all three have their place though in the third Master/Blaster is better than Aunty Entity as a villain and wish they had used them as the main villain. I would start with Mad Max and then watch the rest in order as Mad Max sets the stage for what will come and explains why Max is the way he is. It can work as inspiration for all different types of games and is just worth watching.

Musicians connected with the Royal Symphony have been disappearing. Though this was a problem for the Maestro it was not of note until one of the kings nephews was one of the ones who have disappeared. The question that comes to mind is if the others were just part of a cover to hid this for some reason and is there some plot against the crown connected with this. There is also a possibility that the musicians are needed for some sort of mystical ceremony or summoning. The most gruesome would be that they are being used pieces part is the construction of some sort of specialized flesh golem or creation of a magic item.

Monstrances of Turning are very ornate holy symbols. these can belong to any deity though there will be some that are generic in nature being aligned as good or evil. They are sought after because they will add anywhere from +2 to +5 on turns and double the number can be turned or destroyed. They will also allow a priest to as needed recast any spell that they have previously cast in the preceding 24 hours. There is also a version of this item that is connected with the darker deities. This version is the Monstrance of Summoning and it will allow the user to summon undead three times per day. The undead summoned will be determined by rolling as if they were turning and with a minus four to the roll. The number appearing will be determined as if the creatures were appearing in a lair.The undead will serve the summoner for 9-24 rounds and then if they have not been released from servitude will most likely turn on the summoner.
Posted by Wymarc at 6:36 AM

Great post! I liked that movie, it's very imaginative. Thanks for the fun post. Hope your Friday is going well!

This cover is from the Sleuth edition of MSPE. Flying Buffalo's original edition had a full-color cover.