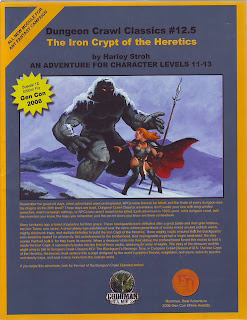 This module was the 2006 GenCon version that was only available at the convention. I really wish I could say that I picked it up personally but I didn't. Someone from online asked if anyone wanted one as they were going. I am afraid that we were the reason Goodman Games seemed to sell out fast that year. This is the 1e version of the module so that makes it just all that cooler.

Interview with a Vampire is based on the book by Ann Rice. I attribute her books as being the start of all the Vampire love that runs rampant today. Anyone who says otherwise is probably just deluded and part of Team Jacob...did I really just use that phrase. If you can look past Tom the movie really was fairly well done. It is worth looking at for anyone doing the vampire gaming if for nothing more than the setting and the interaction between the monsters. Pay special attention to the creepiness factor of Kirsten Dunst's Claudia character as well.

Inhuman creatures have been found washed ashore at the local beach or pier. This while noteworthy itself is added to by the fact that one of the monsters had a satchel filled with gold that could only be from a gold fleet that was lost somewhere at sea over 300 years ago. On that fleet was also rumored to be an artifact of great power that would outstrip the gold in value. This will hopefully inspire the characters to partake in a great undersea adventure. They can solve the mystery of what the creatures are (mutated sahuagin or something worse), if they gold fleet really sank nearby and if the artifact was in fact really and/or still there.

Ice Cubes are small magic cubes that will be no larger than a 2" square and are often smaller. The cube will appear to be made of glass and is transparent. It will also be cool to the touch though not uncomfortably so.  It is actually part of the core material of the Plane of Ice or similar location. The cube will function as both a Ring of Fire and Frost Protection. It will also allow the use once per day to cast Wall of Frost and Cube of Force. In a more mundane use the cube when dipped into any liquid will bring it to just a few degrees of its freezing point.
Posted by Wymarc at 7:07 AM