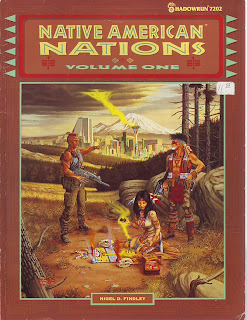 I have previously posted that other than the initial experience with Dungeons & Dragons no other game has sparked my interest and imagination more than Shadowrun. The Native American pair of books are perhaps the best of the supplemental books that have been produced for the game. These books expand on the various tribes that have some into being or reformed since the Awakening. There is also an adventure in the book. Others suggest that the details on the Nations is not detailed enough but I found it enough so I could use as it and add to it when needed without feeling that I was breaking canon if I wanted to mix things up. This is the first of  the two books and I advise you getting these even if you are playing a newer edition of Shadowrun. Lets also not forget about the fine Elmore art used for the cover.


The Neverending Story is one of those, yes yet again, classic 80's fantasy movies. The story revolves around a bullied young boy who wants to escape. He happens upon a mysterious book that eventually brings him into the world of Fantasia. The world of Fantasia is being destroyed by The Nothingness. Of all the ways that a world/universe could be destroyed this was perhaps the most alarming/scary to me. The scary part is not the destruction but the thought of what happens to the people and things that are destroyed by nothingness. It plays off the loss of innocence and fear of insignificance for me. If I had been younger when I saw this I really think it might have been too jarring but then again I would not have had all the baggage I had either if I had been younger. If you have not seen this make a point of renting or buying it. The world itself will have good gaming ideas but the underlying currents of the story are worth it as well....the sequel not so much though.

Noxious fumes have been either emanating from the sewers or sweeping in off the docks at night for the last week. These vapors have the effect of a double sized Cloudkill spell though the save it at +2. The players can be brought in by the near death or death of a favored NPC or perhaps lesser henchman. The source of the vapors needs to be found and eliminated. Is it possible that a young green dragon has some how found its way into the sewers or even placed there for some nefarious reason. Perhaps a periodic gate to some corrupted elemental plane is being opened for a reason and the gas clouds are a result of that or is simply a crazed mage of chaos wrecking havoc for some insane deity......

Nightstones will be jet black stones with what will be a fleeting hint of green or white lines that appear and fade across it's surface. The stone will be anywhere from 2 - 6 inches in diameter though they will weigh more than expected though not so much as to be cumbersome to carry. These stones are highly prized by Rangers or anyone who spend extended periods of time in the wilderness as well as by dungeon explorers. Nightstones when activated will allow those who have attuned themselves to the stone prior to "ignition" to see as if there were a large camp fire up to 120' if desired. The stone will also provide warmth for those who would be made comfortable by it. Once activated the stone much remain within 60' of where it was placed. Moving it beyond that point without first "extinguishing" the stone will deactivate it and have a 20% chance of destroying the magic. To attune oneself a person much touch the stone within one round of the activation word being used. The stones light will also have the effect of improving the chance of surprise by two.
Posted by Wymarc at 8:05 AM