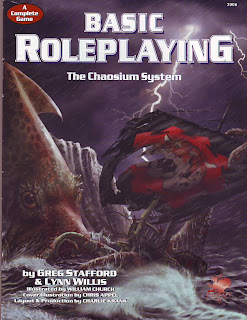 Chaosium games were always easy to learn when you started playing a new one because they were always basically the same system without being the same system. They were sort of GURPS without being built on the premise of GURPS. Their games even often had a short Introduction book that went over the basics. This is what the system evolved into and now they have their own system and will perhaps begin publishing games that won't rehash the core functionality each time.

There will be two sides to this coin. There is something to be said for the whole system being built into the game. If I want to play a game about a n empire in decline led by an albino prince who sells out the kingdom to its long time enemies because by cousin usurped the throne it is nice only have to buy one book and see everything I need there written specifically to that setting.

On the other hand if I want to play in a game where older beings powerful enough to be gods want to return and claim a world/dimension that was theirs first along with a superhero setting with BRP I can now perhaps by setting books which might be cheaper after buying the game system initially.

I am not sure how it will play out and I don't have any strong feelings one way or another. Anyone care to share their thoughts on the matter?
Posted by Wymarc at 6:32 AM