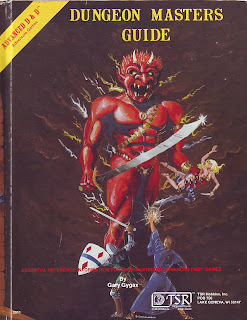 I feel comfortable saying that the 1e DMG may be one of the landmark books in the RPG industry. Today I can still pick it up and feel amazed at the amount of information it contains and how it accomplished what it set forth to do. Compiling useful information for the DM all in one location. I am sure there are perhaps books that have done it just as well or perhaps better in the 30+ years since this was published. But it has been 30+ years and this is still close if not the benchmark others attain to meet.

Dangerous Liaisons is one of my favorite movies. I am pointing it out because I think one of the most underused and forgotten items in a campaign are the NPCs. This movie has two primary characters but it is the ancillary characters that help make this a great movie. Add to that all of the Machiavellian going ons and how could it not be a great movie. I guess what I wanted to point out is give the NPCs a little depth, history and motivation and I think your players will apprciate the effort more than just a better described dungeon.

Diamonds that the players have brought back from a recent excursion into the local depths are found to belong to a local noble with some relationship to the kings court. The diamonds had gone missing recently though the details are less than clear. As a result the players are accused of being the individuals who misappropriated said stones. This of course is not true, right Mr. Thief? Or is it possible that the stones were not stolen at all but then why were they reported missing. Regardless the players must find a way to prove themselves innocent and find a way to identify who really took them. That or turn the party thief in.

Doublets of Station will allow the wearers clothing to appear to be what ever is appropriate for the situation they are in. They can appear to be anything from dirty rags a street urchin would wear to the the robes and trappings a noble would wear. The illusion will cover not only the visual but all other senses as well. The most common variety of  these magic items will not have any effect other than clothing. There have been a small percentage of these (10% or so) that will allow the wearer to appear to the appropriate race and will make anything they say be in the correct language as well as allow them to understand that language. These items are most coveted by spies and thieves allowing them to blend in and have all the changes of clothing they need to do a job or accomplish a mission right on their back the whole time.
Posted by Wymarc at 6:42 AM

This is great. My husband just dusted his old DM guide off to play with our kids. Let's hear it for the next generation of D&Ders.