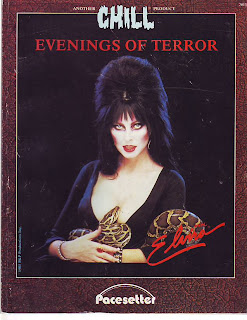 Evenings of Terror is a collection of unrelated adventures for the Chill game system that the GM can use individually as filler for an existing campaign or when they need something on the spur of the moment and don't have anything ready. The adventures vary greatly as is often the case. This is very much the Chill version of the "Lairs" type of modules released by TSR. The list of adventures is below.

The module was released in 1985 and features a picture of Elvira, Mistress of the Dark, on its cover. Having her as the face of the module is indicative of one a larger situation. One of the issues with older "modern' setting type games is that in twenty six years they are no longer modern. Some of the issues in these adventures are what is seen in older horror movies when viewed today. Now everyone, almost, has a cellphone or GPS etc. This means many of the plot devices no longer work. The GM will need to address these concerns unless they have their game set in the 1980's.

As I mentioned the quality of the various scenarios vary and some have complained that some are very cliched. I for one take all of that as homage to the theme of the module. The adventures are very similar to the types of movies she would have shown on the show she hosted. The adventures actually have her introducing and then closing the adventures for the GM. I think we often forget she was the original "Cryptkeeper" on TV.

One of the shows I watch fairly religiously is Supernatural. There was an episode in season four I think were the brothers got sucked into basically what was TV Land. I very much think something like that idea could be applied to all of these adventures making it into a campaign where some larger evil has pulled them into a "B-Movie Horror" universe for some nefarious reason.

In the long run the adventures are generic in theme enough that they could be ripped off for other games. There are some that have S.A.V.E. element but I think that those could easily be worked out or modified. I have been a Chill fan for years. It is not my favorite horror game but it is near the top. I would suggest getting this and most any of the Chill material, Pacesetter or Mayfair, that you can get your hands on.

When this spell is cast the magic user causes the area of effect to fill with dancing blades. These will attack all who are opposed to the caster while they are in the area of effect. The caster can at will declare a target no longer valid and they will no longer be subject to attack.

The victims in the area will suffer a number of attacks per round as if the swords were being held by fighters of a level equal to that of the caster. In addition the swords will gain pluses just as a Sword of Dancing. The first round there will be no plus, then they will gain one plus per round up to plus four. After that they will reset and the process will begin again. The swords will be treated as long swords though the caster can specify a different appearance through the material component.

The material component of this spell is a miniature silver weapon. The design of the weapon will determine what the appearance of the weapons are. The caster can make it anything they want but the damage will be the same.

Disclaimer: The spells that you will see, for how ever long the write ups last, were all written up or conceived of back in the 80's so the terminology may not appropriate for anything other than 1e and depending on how well I did back then it may be slightly off for that as well. If there is any duplication of spells that exist now it is most likely I wrote mine first :) Please feel free to comment on them but try not to be too hard on me. If anyone wishes to use these in anything they print please let me know in advance and all I ask is proper credit.
Posted by Wymarc at 8:12 AM