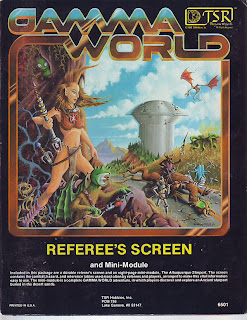 Gamma World is a game I have indicated before ranks in the upper  tier of games I like to play. The Referee's Screen from the first edition of the game has one of the more memorable images from the  game. There is just something about this image that says Gamma  World for me. The cover from the first edition book is great but  it does not capture the feel of what is to come once you start  reading the game.

The screen does it job well enugh. It has the charts and tables  that the GM will need to run the game. It also features a mini  module which though I have never had a chance to use it I hear  very good things about. The module is "The Albuquerque Starport"  which though only eight pages long I have heard can change the  game dramatically if used though that is second hand. I would  pick this up even without the module just for the art though. If  you are going to run the game you need a screen right! As an added bonus it was printed in the USA.


From the screen itself:

Included in this package are a durable referee's screen and an  eight-page mini-module, The Albuquerque Starport. The screen  contains the combat, hazard, and reference tables used most often  by referees and players, arranged to make this vital information  easy to use. The mini-module is a complete GAMMA WORLD adventure,  in which players discover and explore an Ancient starport buried  in the desert sands.

When this spell is cast the magic user causes a sphere to appear based around the point specified. The sphere will cause a disruption in the flow and function of magical energy in its area of effect. This will affect spells but not magical items.

The material component of this spell is a page from a spell book that has been subjected to some fluid so that the text is smeared and unreadable. The page is consumed by the casting of the spell.