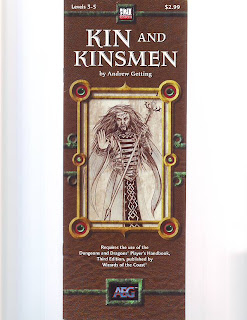 Another of the AEG mini-modules. I apparently did not scan the whole stack of  them so I may be able to locate some of them and actually review them in a  little more detail. For this one Kin and Kinsmen I will have to refer to the  Amazon blurb.

Hidden in frozen wastelands and surrounded by untold treasures is the Kingdom  of the Seven-Day Sun, and home to wise King Jarrod. But times have changed.  At the peak of winter festivals, the head of Jarrod's guard finds his lord  dead upon his throne - murdered. As the castle and its grounds close by both  snow and suspicions, Crown Prince Hess and his council, the Table of Lords,  begin an investigation. During his coronation, Hess is also targeted and  everyone is suspect. Even his own kin, the Table of Lords, is not above  suspicion, for each is a potential heir to the throne. Fingers point and old  rivalries return as the truth is sought. In the dead of winter, among  murderous alliances and old bonds of blood, regicide looms large. The  greatest terror the land has ever seen grows terrifyingly close to the  throne, and all that stands between the Kingdom of the Seven-Day Sun and its  fate is a band of foreign warriors untrusted by all.

When this spell is cast the magic user causes a lock that illusionary in  nature to appear. The lock will appear on any item that the caster wants  though having it appear on something a lock would not normally be on will  make it obvious as not being real. The lock will appear to be the appropriate  type for what it is would be on.

The lock when looked at will not be detectable unless the person looking at  it specifically states they think it is illusionary in nature and then they  make a saving throw versus spells. There is nothing to give a character  reason to be suspect of the lock so if players begin doubting every lock the  DM may want to start applying penalties to their saves.

If a thief tries to pick the lock you can have them go through the normal  process. When the attempt begins the caster will become aware of the attempt  to pick the lock. The thief will have their normal pick lock percentage  reduced by one percentage point per point of intelligence of the caster.  During the process if they succeed or fail the thief will get another save  this time at +4. If the lock is picked or a save is made the illusion  vanishes.

The material component of this spell is a small lock and key that will cost  the cater no less than fifty gold. The lock must remain on the caster if they  are to be made aware of the attempt and a new lock must be used for each  casting.

Disclaimer: The spells that you will see, for how ever long the write ups  last, were all written up or conceived of back in the 80's so the terminology  may not appropriate for anything other than 1e and depending on how well I  did back then it may be slightly off for that as well. If there is any  duplication of spells that exist now it is most likely I wrote mine first :)  Please feel free to comment on them but try not to be too hard on me. If  anyone wishes to use these in anything they print please let me know in  advance and all I ask is proper credit.
Posted by Wymarc at 5:36 AM