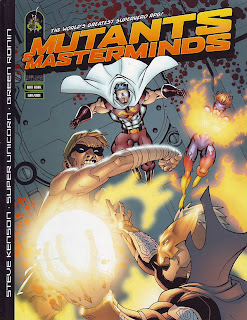 Mutants & Masterminds is yet another of the games I have bought over the  years and have never had a chance to play yet. After fantasy games I may have  played superhero games the most. The vast majority of that was Champions and  then Villains & Vigilantes. There were also brief periods of Heroes  Unlimited thrown in there as well as some DC Heroes and Marvel Super Heroes.

I own a few books in the Mutants & Masterminds line. I was told at one point  that I need to be aware of the edition as they are not 100% compatible but  that may or may not be true. I pick them up to read the characters and  back story more than anything else. The Wild Cards supplement was really well  done in my opinion.

The game must be popular as it went into its third edition late last year.  Since I was told that some products are not fully compatible I am not sure  how I feel about that. Three editions for a game that has been out for less  than 10 years may be a bit too much change for me. Even Wizards doesn't  update editions that fast (hope my math was right there).

The next convention I am at I am going to try and find either a demo of this  game or a scheduled session and give it a run. Of the non licensed products  it seems to have the most longevity after Champions. I say that but then I  will get there and they will have a dealer room and perhaps a multi-day  auction and next year I will be saying the same thing. I guess the good news  is that I might learn it before the fourth edition makes it out sometime in  2012!

By means of this spell the caster is able to cause themselves to exist in two locations at one. The spell does not copy the caster buy alters reality allowing the actual caster to exist in both places at the same point in time.

The caster will be able to fully function in both locations. They will also be able to operate simultaneously even to the extent of casting at the same time. Spells cast will draw from the same list of available spells though. Actions taken by the caster at either location will remain in effect when the spell ends. This extends to items so anything the caster may have on them when the spell expires will be at the original location though there will be no duplication.

The spell range is unlimited as long as both location are on the same plane. There will be consequences if the two locations are too close though. If both instances of the caster are within 500 yards of each othr there is a 10% cumulative chance that the two instances will be pulled together and appear at a random location between the two spots.

The material component of this spell is a token made of silver or other precious metal. The token must have the image of the caster engraved on it. The caster flips the token in the air and it will appear where the other instance is to appear along with the other instance.

Disclaimer: The spells that you will see, for how ever long the write ups last, were all written up or conceived of back in the 80's so the terminology may not appropriate for anything other than 1e and depending on how well I did back then it may be slightly off for that as well. If there is any duplication of spells that exist now it is most likely I wrote mine first :) Please feel free to comment on them but try not to be too hard on me. If anyone wishes to use these in anything they print please let me know in advance and all I ask is proper credit.
Posted by Wymarc at 6:03 AM

Our group has been historically oriented towards Champions (although we had played V&V and DC Heroes in the past). I came into M&M 1e really skeptical, especially because it had the d20 basis. But I ended up really loving it- since you could get a couple+ very cool fights in a session and have everyone feel like they contributed something.

I was annoyed when they went to 2e, since I'd bought everything for 1e. But the second edition is stronger- and characters/ideas from the 1e stuff could easily be ported over (with some exceptions like the Nocturnals and Gimmick's Guide to Gadgets books. So I bought what I wanted out of 2e because it worked and was fun to run.

I'm not sure I'm going to make the leap over to 3e or DC Adventures...I bought the latter because I like DC. I haven't yet seen how the changes improve the game, though many have said they do. In short, I like M&M quite a bit- and that's coming from a former Champions person.

@Lowell Thanks for the feedback. I really want to give it a try some time. Just a matter of find a group and the time...I have those reversed in likelyhood of happening though. I really hate growing up. I think the Who had it right :)