Foul Locales: Behind the Gates, Aging 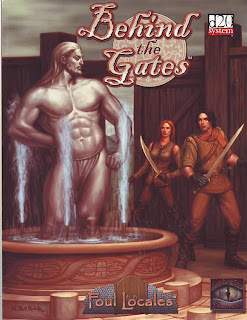 Behind the Gates is the third in the Foul Locales series by Minds  Eye Games. The series is very much like the Book of Lairs in that  they include short encounters that can be sued as one shots. This  one since it deals with city encounters could be compared to the  Flying Buffalo Citybooks. This is clear since the encounters all  have plot hooks provided just as the earlier books did.

This came out in 2003 and was released under the D20 license. It  is 136 pages long and contains sixteen unique encounters that are  meant to be played individually though a creative GM could  combine them in different numbers to make something larger. They vary in level (encounter level) so it might be hard to combine  some but for the GM this is good as a wide range of levels are  included.

In addition to the sixteen different encounters the book contains  additional material that was all released under the Open Gaming  Content. Behind the Gates offers eight new magical items, six new  feats, two new pieces of equipment, a new domain, three new  diseases, eight new monsters (three of which are templates), five  new prestige classes (and a new base class), six new spells, and  a new form of martial arts. The encounters themselves have advice  on where and how the GM might utilize them in their game.

Some of the highlights of other included material are the rumor  tables provided for the encounters. These contain a good mixture of useful information and red herrings for the GM to provide the  part. There are also expanded zombie templates for the GM to use.  The different templates change the zombie based on how the creature ended up becoming a zombie. Finally there is another example of  the Witch as a class.

These types of books are something that a GM can always fine  useful. From the earliest examples from Judges Guild to the Book  of Lairs from First ad Second edition to these books one can  always find something to take from them. The trick is finding one that has a good return on investment. This one falls into the plus side of that measure in my mind.

When this spell is cast the magic user causes a sphere of energy to appear at the desired location. The effect of this sphere could be considered a temporal fireball. Those caught in the area of effect will under an immediate bout of aging.

The number of years the victims will age is one year per every two levels of the caster. In addition to the aging effect the victims will also suffer damage due to the effect of the aging. Each person will suffer 1d4 for every year of aging. All in the area of effect are entitled to a saving throw versus spells. Those that save will have the aging effect and the damage halved.

The material component of this spell is a small vial of bone dust from a creature who dies from unnatural aging. When the spell is cast the vial is opened and thrown into the wind in the direction of the desired spell effect. Where the dust blows does not affect the spell in any way.

Disclaimer: The spells that you will see, for how ever long the write ups last, were all written up or conceived of back in the 80's so the terminology may not appropriate for anything other than 1e and depending on how well I did back then it may be slightly off for that as well. If there is any duplication of spells that exist now it is most likely I wrote mine first :) Please feel free to comment on them but try not to be too hard on me. If anyone wishes to use these in anything they print please let me know in advance and all I ask is proper credit.
Posted by Wymarc at 5:58 AM