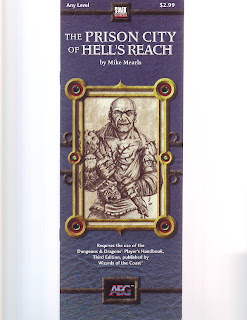 The Prison City of Hell's Reach. With a a name like that how could you not  want to buy this. Actually I did not buy any of the AEG mini-modules  individually. I purchased a stack of a dozen or more off eBay for a insanely  low price. I thought I would buy them and then convert them to whatever  system I was playing at the time.

As many things have they ended up getting scanned and inventoried long before  I ever got around to doing anything with them. I did look them over and I  recall thinking that the idea was good but the ROI was just not there. The  first issue was the size. I am not a fan of things that do not fit  traditional gaming book sizes. Next I would rather have a single normal size  book that I pay more for where there are multiple one shots. Still if you can  get them cheap like I did then they work out OK. Below is the material from  the back of the module.

According to myth, Hell spewed forth a foul seed of its damned terrain that  took root in the world and yielded the ruined city known as Hell's Reach.  Once a prosperous trading port that harbored pirates, outlaws, and worse  within its walls, the gods themselves punished the city for turning its back  on its one-time patron deity and embracing decadence, greed, and violence. A  tremendous earthquake sundered the peninsula that connected the city to the  mainland, leaving it a half-flooded island populated by small bands of  desperate survivors. Hell's Reach is now a dumping ground for criminals  deemed too dangerous to ever allow back into society and too likely to break  free from prison.

Though warships constantly patrol the waters around Hell's Reach, travel to  and from the city is not impossible. Smugglers and other criminals use  magical means to ferry weapons, armor, and other goods to the ruins, trading  such mundane items for poisons and worse. As a one-time prosperous port, many  fabulous treasures lie hidden within the city's crumbling walls, and more  than a few daring bands have ventured into the city. Those that make it out  speak of desperate bands of cannibals, highly organized criminal gangs, and  much worse that stalk the streets. Yet these same survivors often return  laden with gold, jewels, and magic.

When this spell is cast the magic user enchants a number of weapons with an effect that in all ways, except for the amount of damage done, acts like the touch of a mummy. All of the effects of the mummy's touch will be present and can affect victims hit by the weapons.

Any individual or creature hit by the weapons will need to make a saving throw versus poison every time they are struck. Those who fail will have contacted the mummy rot and will not need to make any further saves. The effect from this is not immediately apparent so the DM will want to make note of who is affected and adjust how healing affects them.

The number of weapons the caster can enchant is based on their level. The caster will be able to grant the effect to one weapon plus and additional weapon for every five levels of experience rounded down.

The material components of this spell will be the wrappings of a mummy that was at one point undead. The wrappings are not used up by the spell and may be reused for future castings of the spell.

Some of these little modules were pretty good for filling out your sandbox or covering up for a week when DM imagination left the building. On the other hand, some of them were downright awful!